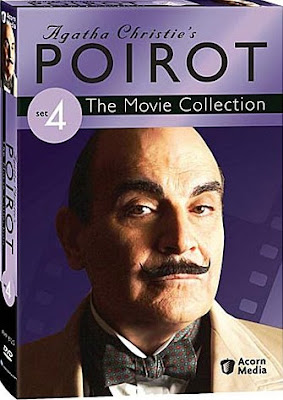 Cat Among The Pigeons
DVD Review: Poirot: The Movie Collection Set 4
Agatha Christie may not be a name readily associated with spies, but when you consider how many mysteries the incredibly prolific author penned–and how many motives she had to come up with–it’s not surprising that more than a few featured espionage. One such novel was Cat Among the Pigeons (written in 1959), a title adapted for TV this year and featured in the latest set of Poirot mysteries from Acorn Media, Poirot: The Movie Collection - Set 4. Personally, I love a good mystery and I love Poirot, and the addition of spies sweetens the deal even more. On top of that, this story was adapted by Mark Gatiss, one of my very favorite contemporary spy writers! (Although he’s probably better known for his acting and for being a member of the darkly hilarious comedy troupe the League of Gentlemen.) Gatiss is a self-described fan of the Grand Dame of Mystery, and having previously appeared in another Poirot (and a Marple), as well as having sent up Christie in the endpapers of his novel The Devil in Amber, it’s high time he penned a Poirot. With its inclusion of secret agents and allusions to adventures in far-flung corners of the Empire–combined with its girls’ school setting–Cat Amongst the Pigeons is a good match for Gatiss’s sensibilities. Despite the ripe ingredients, Gatiss resists the path of camp, which shouldn’t surprise anyone who’s read his Lucifer Box novels. Yes, they are parodies of a genre he clearly loves, but what makes them so enjoyable is that they manage to be at the same time exemplary of that genre. They’re not send-ups of pulpy adventure novels; they’re bona fide pulpy adventure novels with lots of humor. "Cat Amongst the Pigeons" may lack most of that humor, but Gatiss latches onto and plays up the hints of pulpy adventure in Christie’s novel. 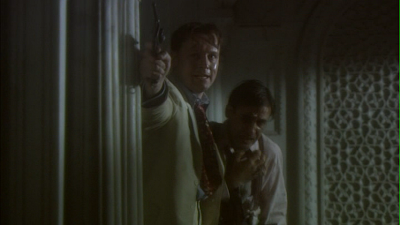 Such adventure starts things off in a prologue set somewhere on the subcontinent as two strapping, stiff-upper-lip Englishmen make a heroic last stand against the vile revolutionary hordes overrunning a palace. Evidently, they’ve seen to it that someone or something got safely out before the fortress fell. What all this has to do with the plot, of course, we’ll have to wait to find out, as instead we join Belgian sleuth extraordinaire Hercule Poirot (still played to perfection by David Suchet after inhabiting the role on television for twenty years) as he visits a girls’ school to give a speech. Detectives giving speeches at schools is an odd theme in Golden Age British mysteries and the TV adaptations thereof, and I’m jealous of those schoolchildren. I certainly never had any famous detective make a speech at my school! (Well, unless you count the DARE officer, I guess.) Anyway, Poirot’s there to make a speech, but of course a murder occurs, as always happens wherever he goes. Naturally, he’s asked to stay on to investigate, working in full cooperation with the local police. And of course, everything is not what it seems at this school. 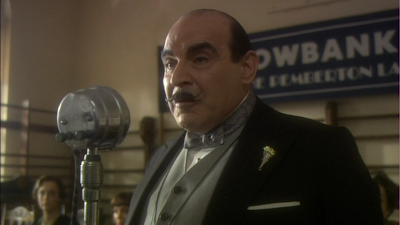 For starters, the hunky young gardener who all the girls are into is really an agent of His Majesty’s Secret Service, tasked with looking after a princess in their midst. The princess is the rightful heir to the throne of that faraway country where the revolution’s just occurred. His Secret Service credentials, however, don’t eliminate him as a suspect. After all, MI6 could have ulterior motives here, playing out their games of international politics on the soil of a British girls’ school! And the gardener’s not the only spy in the mix anyway. Poirot quickly discovers that there’s also a mysterious, deadly female agent among the students or the teaching staff, codenamed "the Angel." But who is she? Finally, there’s also the strong possibility that one of the girls’ mothers is a spy as well! Far-fetched? Not at all! "The secret service recruits from all walks," notes one character. "It’s quite possible that Mrs. Upjohn was a part of them. Without her being some sort of female Bulldog Drummond or something!" If only Mrs. Upjohn were around, perhaps she could shed some light on the identity of the Angel (a former British agent turned double turned independent operator and now presumed dead) and the increasing number of murders happening around the campus! But she’s not; she’s off in Europe. 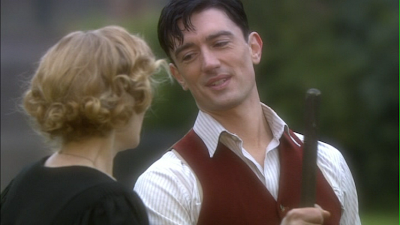 As the body count builds, the princess is kidnapped, secrets are exposed and a Royal treasure comes into play (of course!), the girls (including Harry Potter’s Cho Chang, Katie Leung, in a small role) are all atwitter about the goings on: "I think I might swoon if anything else happens. It’s just too too thrilling!" Indeed it is thrilling. This is the ideal playground for Mark Gatiss to operate in, and he has a great time translating Christie’s various clues and misdirects to the screen. Despite all of these exciting trappings sure to please the spy fan, however, it’s simply not one of Poirot’s most devious mysteries. If that’s what you seek, you’re better off with the second feature-length episode included in this package, "Mrs. McGinty’s Dead."
"Mrs. McGinty’s Dead" has nothing to do with espionage, but as long as you’ve gotten the set for "Cat Among the Pigeons," you might as well watch it! It’s got the cleverer plot of the two, and it’s almost as much fun. This is Poirot in his more familiar milieu, solving a murder at the behest of the police in a small English country village. Everyone in the village has secrets, naturally, and Poirot quickly deduces that one of the women in town is either a murderess who escaped to Australia decades ago, now come back with a new identity, or else her daughter. It’s likely that the titular Mrs. McGinty recognized said person, and that that knowledge led to her titular state. Now it’s up to Poirot to divine who it is, and true to the Christie formula, there’s bound to be at least one more murder along the way... 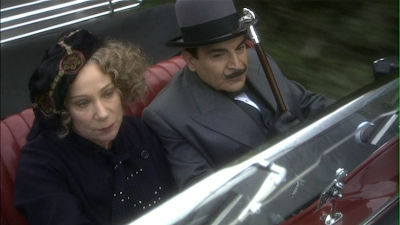 "Mrs. McGinty’s Dead" sees the return of Poirot’s sometime sidekick mystery writer Ariadne Oliver (Zoe Wanamaker), whose welcome presence affords writer Nick Dear the chance to poke the same fun at those who adapt classic mystery novels to other mediums as Christie did at mystery novelists themselves. Ariadne is in town to collaborate with a successful playwright on a play about her foreign detective hero, the not-un-Poirot-like Sven Hjerson. The playwright, of course, wants to sex it all up, much as the TV producers have been accused of doing to the latest incarnation of Christie’s Marple. And he wants to turn the sixty-year-old Sven into a skiing action hero, much to Ariadne’s dismay. "He’s sixty!" she protests, to which the playwright tells her that he’s now much younger, as otherwise his sexual relationship with the teenage girl he’s helping would seem inappropriate. She tries to insist that there is no sexual relationship, and that Sven has never shown any interest in women, but the boxoffice-savvy playwright says that simply can’t be. I’m not sure how many of these objections come directly from Christie, but even if they do, they still play perfectly as contemporary in-jokes. Everything builds to a classically Poirot denouement in this thoroughly satisfying entry in the series. 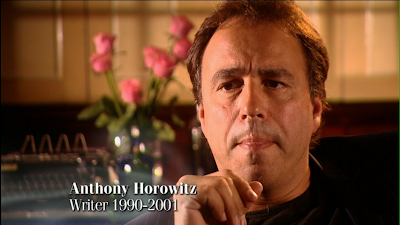 Unfortunately, two scant ninety-minute episodes aren’t enough to fill Acorn’s standard three-disc Poirot set, so the company pads out this release with a third disc containing an hour-long TV special "Super Sleuths: Poirot". Although built-in teasers for ad-breaks belie its TV origin, this special is a decent overview of the character containing enlightening interviews with Suchet and some of the other regular actors from the series’ earlier seasons (it’s honestly refreshing to see Captain Hastings back in the form of actor Hugh Fraser; I do miss him from the current adaptations, even if his absence is true to the books) as well as writers and producers. Most interesting to spy fans among the latter is Alex Rider creator Anthony Horowitz, one of the original creative forces behind the series. Horowitz calls Christie out on her over-reliance on "in your face" clues, but says she has a fantastic ability to construct different solutions to murders; he loves her endings. The documentary mercifully doesn’t give away any of those endings, but it does talk a lot about Curtain, Poirot’s final adventure, and any significant mention of that story is bound to contain certain spoilers. "Super Sleuths" is a worthwhile bonus feature (though one with limited rewatchability) and a pleasant inclusion in the set, but its presence hardly justifies the steep fifty dollar price point. Luckily, the set can be readily found for much less at various online retailers, and the two actual mysteries make it a worthy addition to any Poirot collection–as well as an entertaining rental for spy fans curious to dip their feet into the related mystery genre.
Posted by Tanner at 4:04 PM