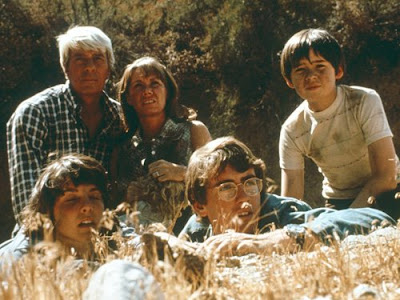 Peter Graves' Post-Mission Career: Where Have All The People Gone? (1974)

Following the conclusion of Mission: Impossible, Peter Graves starred in a string of TV movies with titles like SST: Death Flight, The President's Plane Is Missing and Where Have All the People Gone? Despite a title that sounds like it belongs in Troy McClure’s filmography on The Simpsons, the latter is a fairly effective low budget post-apocalyptic thriller. Graves, playing his actual age now instead of insisting on the ridiculous late-season Mission: Impossible assertions that he’s a “young man” and that his hair is blond and not white, is the patriarch of a California family on a camping trip in the mountains. His wife leaves in their car to head back to their home in Malibu for work, leaving Graves and his son and daughter (a young Kathleen Quinlan) with family friend Tom Clancy (not the writer). While Clancy cooks dinner, the family does a little spelunking. Clancy witnesses a strange flare in the sky. Is it a distant atom bomb? Or is it the sun itself flaring up in an unpredictable fashion? Whatever it is, it’s followed immediately by an earthquake. Graves and his children come clamoring out of the cave, safe. But Clancy, having witnessed whatever it was he witnessed, doesn’t feel so well. Within a few days he’s dead, and his body, strangely, disintegrates, leaving only his empty clothes and a little sand. This–combined with the fact that the radio hasn’t worked since the earthquake–convinces Graves and his kids that it might be a good idea to hightail it home. (They’ve already had the foresight not to eat any food except what was down in the cave with them at the time of the event, lest the rest be radioactive.) 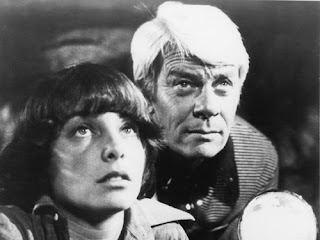 The trio eventually ambles into suburbia, and finds it completely deserted. No people anywhere! Hence the title. (Strangely, there also aren’t little piles of clothes all over the street as you’d think there would be if they all disintegrated like Clancy, but we won’t worry about that. It is a missed opportunity for some extra creepiness, though.) The spooky, people-free atmosphere leads to a nice shock moment when they discover a living person staring out a window at them. Eventually they encounter some other survivors, but no one has much idea what has happened or why whatever it was didn’t happen to them. We do get an explanation in the end (having to do with solar flares), but it’s so implausible that the filmmakers would have been much better off leaving the entire phenomenon unexplained. Heading for Malibu, where they hope to find their wife/mother, our trio pick up a few traveling companions along the way including a young boy and a woman named Jenny who won’t speak a word. Other survivors aren’t so amicable, having quickly resorted to violence. (The group has their car stolen at gunpoint, and the boy’s parents were killed for their vehicle.) Whatever event transpired, it also made the animals go crazy. Peter Graves fans will get a kick out of seeing him bravely fight a “savage” house cat and a collie not unlike Lassie!

Director John Llewellyn Moxey (a veteran of The Avengers and other ITC spy shows as well as Mission: Impossible) generates a generally creepy atmosphere, but I kept hoping for a different ending. I kept hoping that Anthony Zerbe or someone would pop out and reveal that he was behind some massive con job, making Graves believe that the world had ended and he was the last man on earth as revenge for all the times Graves and his crew played that exact trick on traitors and foreign agents and Syndicate men on Mission: Impossible! Alas, it’s not to be.

Where Have All the People Gone? isn't on DVD, but it does play from time to time on the Fox Movie Channel.
Posted by Tanner at 12:38 PM

Thanks for posting this. I had dim memories of this film from my childhood, but had it confused with William Girdler's DAY OF THE ANIMALS, and when I watched that movie on DVD a year or so ago, I wondered why it didn't play out as I remembered.

He also played private eye Lew Archer in "The Underground Man" in 1974. Paul Newman had played the same character but under the name Lew Harper in "Harper"(1966) and "The Drowning Pool"(1975).

Mixed up memories or not, I think you saw the better movie, Christopher. Day of the Animals is more fun than this movie, overall!

I only recently learned about that Lew Archer movie, and I was surprised because I'd heard MacDonald wouldn't let them use the name Archer for the Newman movies. Have you seen it, Delmo? I'd really like to track that one down!

I like this movie. I wonder if it was intended as a pilot? You can imagine where the show might have gone from there, probably sort of a post-apoc FUGITIVE with Graves and his family wandering and encountering guest-stars-of-the-week.

It is now available from DirecTV On Demand, if anyone needs to watch it today.

I had heard the name was changed for the film supposedly because Paul Newman had recently enjoyed success with Hud (1963) and the producers wanted the movie's title to begin with "H".

I have it on tape. I'll see about making you a dub.

Great write up! Fox Movie Channel also airs another TVM from 1974, SCREAM OF THE WOLF, which has stayed with me for almost thirty years. Peter Graves got to be the good guy, but Clint Walker was just so sinister in that movie...

I was wondering the same thing, Marty. It definitely does seem like it could be the set-up for something. And I'm sure Graves was looking for another series at that point. (I know the Archer movie was intended as a pilot.) Thanks for sharing that this is on DireTV On Demand!

Interesting about the "H" movies, Delmo. Weird! (But totally believable in Hollywood.) Thanks for the dub offer! I'll email you about that.

CK, I'd really like to see "Scream of the Wolf" too. I'll keep my eye out for it on FMC. I just got "The President's Plane Is Missing" on DVD yesterday, so I'm looking forward to that one too!