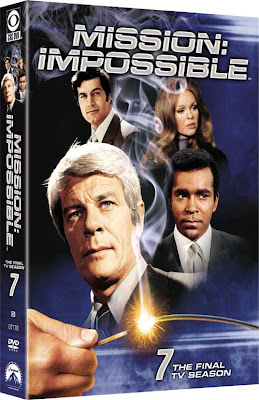 TV Shows On DVD reports that CBS/Paramount will release Mission: Impossible: The Final TV Season (Season 7) on DVD on November 3. This is welcome news, as once again I was getting a little anxious as the studio announced title after title for the fall (Hawaii Five-O, The Fugitive, The Untouchables) with no Missions in sight! But at last it's announced, and the announcement is bittersweet. I'm looking forward to seeing the final season and owning them all, but I'll also be sad to see this journey come to an end, as I've loved discovering these original seasons as they were released on DVD. On the plus side, hopefully CBS/Paramount will continue apace with the version of Mission: Impossible I grew up on: the late Eighties revival series, also starring Peter Graves. Of course there is no word on that yet, so we'll just have to wait and see. I'd imagine a Complete Series set is also in the cards (along the lines of their Wild Wild West Complete Series), but will it be ready for this holiday season, or next? Or will they wait until the two seasons of the revival series have been released as well to make it a truly complete bundle? Again, we'll have to wait and see. But for now, we do know for sure that Season 7 will be out in November! The seventh season retains the same primary cast line-up as the sixth, with Barbara Anderson filling in as "the woman" on the team while Lynda Day George was pregnant.
Posted by Tanner at 11:24 PM

I'm thrilled and saddened like you, about the end of the series. However, I won't be buying the 1988-90 series. I don't have much nostalgia for the late-eighties like many of my generational peers.

And don't forget the three most-used phrases in "Syndicate"-era Mission:

"Your mission, Jim, should you decide to accept it, is to put [name or group here] out of business for good."


I look forward to your review on S7.

Me too! :) But hopefully I'll have my review of Season SIX up before then! That's sadly become one of the many "lost" posts, and I need to fix that. It's been long-written (and includes all those phrases you mention, I think!), but fell victim to problems with my picture-uploading abilities. Now that that seems to be under control again, I'm REALLY hoping to get it put together soon!

I really hope they put out Mission 88. It is available through the fan market but it would be great to see it cleaned=up. That show, and "It Takes a Thief."

I'm with Brian! I want the revival series. (Although I haven't ever come across it on the fan market. Are you sure it's out there?) CK, I have no illusions that the 80s version will remotely live up to the Sixties one (and I think it's probably pretty clear from this blog which decade's entertainment I prefer!), but I do want to see it on DVD both for nostalgia's sake and for completion's sake!

As for Sixties series, like you, Brian, I want to see It Takes A Thief, as well as The Girl From UNCLE. Off the top of my head, I THINK those are the last two CRUCIAL American Sixties spy shows that we still need... And I know they're both available on the fan market, but I'm hoping for legit releases soon. I'm really surprised that ITAT hasn't been released yet considering it's on Hulu!

From the Eighties, I'd like to see Scarecrow and Mrs. King.

OMG, 'Scarecrow and Mrs. King' was one of my favorite espionage shows from the '80s! I can still vividly remember my playbacking ''TAPED'' recording of the awesome opening theme by Arthur Rubinstein on Walkman cassette player (!).