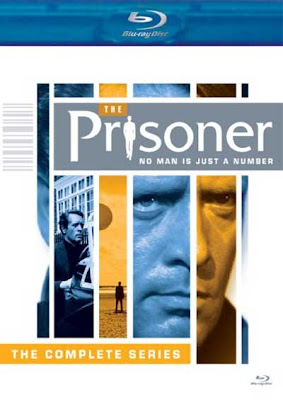 TV Shows On DVD reports today that A&E has revealed the cover art for their upcoming Blu-Ray edition of Patrick McGoohan's cult classic 1967 spy TV series The Prisoner. And the art's pretty cool! A lot cooler, in my opinion, than the art on A&E's standard DVD version. The Prisoner hits Blu-Ray on October 27, just in time for the AMC mini-series remake starring Jim Caviezel and Ian McKellen that debuts the following month. I was kind of dreading this remake until I saw the Comic-Con footage, and now I'm actually excited for it! Of course, we all know there's no way it will be able to touch the brilliance of the original, though, so it's great news that it's being preserved in high definition on both sides of the Atlantic. Network releases the long-delayed, feature-laden UK Blu-Ray on September 21.
Posted by Tanner at 3:26 PM

Personally, I'm a little disappointed that the original typeface for the title and the penny-farthing motif is not employed for the blue-ray cover art.

Otherwise, thanks very much for this info. Your blog has become one of my new favorites.