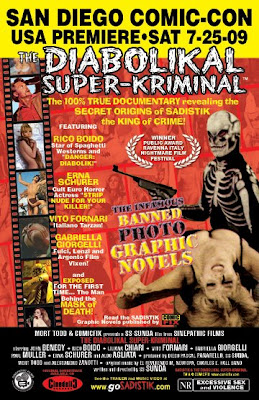 Director SS-Sunda's documentary The Diabolikal Super-Kriminal enjoyed its U.S. premiere at the San Diego Comic-Con on Saturday night with producer Mort Todd in attendance. Todd explained how he came to be involved with the project. After attempting to secure the license to publish Diabolik fumetti (Italian comic books) in English and failing, Todd looked into what other Italian fumetti sensations were available. He discovered that the skeleton suit-clad sociopath Sadistik (also known as Killing) was available, and ended up buying the character outright. An Italian company then approached him about doing a documentary on the character, and the project was born.

The Diabolikal Super-Kriminal isn’t just a movie about Sadistik (himself a rip-off of–er, variation on the original skeleton-suited sociopath Kriminal, who was in turn a Diabolik rip-off), but about the entire fumetti neri genre so popular in mid-Sixties Europe. Fumetti neri simply means “dark comics,” but it’s great to learn the technical term for all these masked criminals like Diabolik, Sadistik, Kriminal, Mister X, etc. When I reviewed a bunch of these movies in April, I used the term “costumed adventurer” as it was less specific about the characters’ motivations than “superhero.” Whereas Americans preferred their costumed adventurers to be heroic, Italians and Germans gravitated instead toward shadowy figures operating outside the law, taking on the system and getting away with it. Todd speculates that this identification with the “bad guys” is the result of losing two world wars, and he may be onto something there. The movie focuses on the ways in which the comics pushed the boundaries of sex and violence (not to mention good taste) in a predominantly Catholic country subject at the time to Draconian censorship by Church-sponsored morality police. Indeed, the lurid covers and interior artwork showcased in the film are positively dripping with both eroticism and sadism. Unfortunately, the images flash by so rapidly that it’s a bit tough for a non-Italian-speaking viewer to take them all in while also keeping up with the subtitles. (Luckily you can see a bunch at the film's official website!) 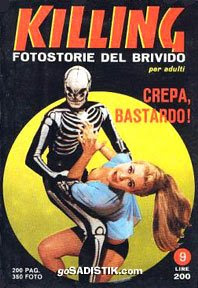 Diabolik was the first (and by later standards also one of the tamest–or classiest) of these fumetti neri, and the movie makes interesting points about his creators, the Giussani sisters, using the character to not only embrace the anarchic spirit prevalent in post-Mussolini Italy, but also to overcome–through their escapist male creation–the rampant sexism of the era. The huge success of Diabolik quickly spawned countless imitators who pushed the boundaries of taste as far as they could go. Too far, in fact, resulting in a sudden tightening of censorship on comic books following the brief period of greater creative freedom. Unable to meet the public’s insatiable desire for sex and violence with drawings, director Rosario Borelli and his editor decided to take their latest character, Sadistik, in new directions–as a photo comic. (I'm simplifying here; the documentary goes into fascinating detail about the various iterations of this character prior to the photo novels, as does the producer's website.)

Photo comics were exactly what they sound like: a series of sequential panels of photographs of actors and actresses–complete with costumes and props–telling a story. They were movies on paper, and they were for the most part shot and created by veterans from the world of film. Even the actors came from that world. Future giallo mainstay George Hilton portrayed Sadistik’s relentless adversary, Inspector Grant, in the first eight issues, and other familiar faces from the Eurospy and Spaghetti Western genres popped up again and again. (The actor who played the gangster who casually stops the bullet hole in Valmont’s plane with chewing gum in Danger: Diabolik played one of the main roles in the Sadistik photo comic.)

The considerable section of the film dealing with photo novels is fascinating, since the whole genre is pretty much alien to American audiences save for the occasional film-based paperback. (I think I have a photo novel of Star Wars buried somewhere in my parents’ basement.) Many actors are interviewed, and some took their work quite seriously and remember it fondly, while others scoff at the whole fad and pretend to have forgotten it, as they clearly don’t appreciate a documentarian dredging up that embarrassing part of their career! Sadistik himself is always pictured in his mask except when seen in bed with his girlfriend, Dana–but even then his face is turned away. Therefore, the filmmakers try to build up a big mystery over who it was behind the mask. This bit may play well in Italy if these potential candidates are well-recognized there (the producer said that one of them went on to become the Italian Regis Philbin), but since American audiences have no vested interest in these people and presumably just met them on film, the whole mystery angle fails to generate much intrigue and plays rather tediously. Todd mentioned that the film would be re-cut for American audiences before its release, and hopefully this sequence is one that will be tweaked. 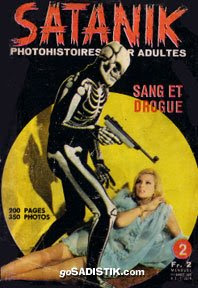 When public disapproval grew for the utterly amoral Sadistik, the producer behind the photo novel attempted to recreate its success with a different genre: a more traditional spy formula. But the James Bond-inspired series (“Don” something... I wish I could remember the full title) failed to catch on the way Sadistik did, and folded after seven issues. This brief snippet of the film really caught my attention though! If these play out like Eurospy movies on paper, then I would love to get my hands on some of them!

Overall, I learned a lot from The Diabolikal Super-Kriminal. It covers a little-known pocket of Sixties pop culture, and for that I found it fascinating. It could have benefited from the inclusion of Kriminal or Kilink film footage, but presumably there were rights issues precluding that. (A potential sequel teased at the end looks like it will focus more on the films.) The filmmakers make a valiant effort to make up for the lack of clips by staging their own filmed recreations of scenes from the photo novel, and their success at creating a suitably vintage feel for these clips is aided immeasurably by the soundtrack (featuring contributions by El Reverendo M, Neuropa and the Charles E. Hall Band), which has an appropriately Sixties Euro vibe to it. If the idea of a masked antihero in a skeleton suit (which is revealed to have been designed by Carlo Rimbaldi!) holds any appeal to you, then you should not pass up any opportunity you have to watch The Diabolikal Super-Kriminal. 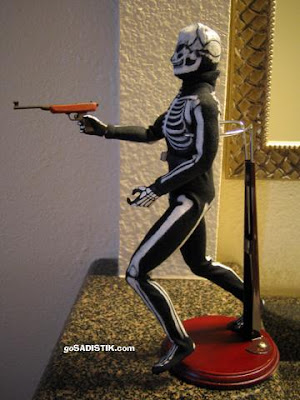 Todd hopes for a limited US theatrical distribution (probably at midnight showings) before releasing the film on DVD. In the meantime, fans can slake their thirst for Sixties Euro-sleaze by purchasing reprints of the photo novels through Comicfix, available in English for the first time ever! Todd plans to license the character further. He had with him the prototype for a twelve-inch Sadistik doll (similar to Sideshow figures) complete with skeleton suit and distinctive Sadistik pistol! The doll should be available later this year, and Todd hopes there will be variations in the future with different versions of the suit, including those worn by Sadistik’s unauthorized imitators like Kilink. There are also plans for the aforementioned second documentary, focusing specifically on all those imitators around the world. Apparently the character lived on in South America into the 1990s! Thanks to The Diabolikal Super-Kriminal, he’s likely to live on still all over the world.
Posted by Tanner at 11:55 PM

Thank you for spreading the word. Your collection of comics, action figures and rare films will be safe from pillage by me!

How can I find this on dvd?