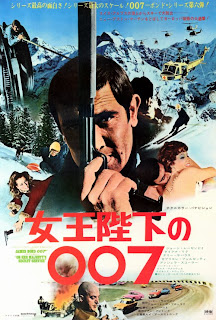 Upcoming Los Angeles Spy Screenings: On Her Majesty's Secret Service And From Russia With Love

The great Egyptian Theatre in Hollywood (my personal favorite movie theater anywhere) will show two of the best James Bond movies on the big screen on Saturday, September 26 as part of their IB Technicolor Festival. That means they will be gorgeous 35mm dye-transfer Technicolor prints. And what does that mean? As the Egyptian explains it on their website, these films "were released using the brilliant, deeply saturated hues of dye-transfer Technicolor (commonly known as I.B. or 'imbibition'). Dye-transfer Technicolor prints are becoming increasingly scarce since Technicolor stopped U.S. production of them in 1974." So it's very rare to see an actual Technicolor print of either of these films, even if you see them on the big screen in 35mm.
I saw OHMSS when it played at the Egyptian's Technicolor festival for the first time about five years ago, and the print was utterly stunning. It was far and away the best presentation I've ever seen of my favorite Bond film, including Lowry's impressive 4K digital restoration on DVD. (The day-for-night fight scene on the beach at the beginning has never been transferred to any home video format as it appears on the Technicolor print, and it's a revelation to see it that way.) In fact, it was that first IB Technicolor screening that solidified Peter Hunt's film as my favorite Bond, as up until then it generally contended with two or three others for the top spot depending on my mood. Hopefully this September's screening will be the same print. Assuming it is, I highly recommend that any local Bond fans make every effort to see this screening!
OHMSS is up first at 7:30, followed by From Russia With Love, which will probably start a little after 10PM. Go to the Egyptian's website for more details.
Posted by Tanner at 5:23 PM

I so wish this event was happening this coming weekend. I'd fly down for sure. I love that theater (once saw a great Hammer double feature there), and these two usually make my top list of Bond films.