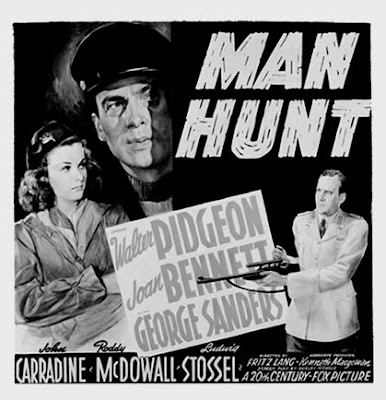 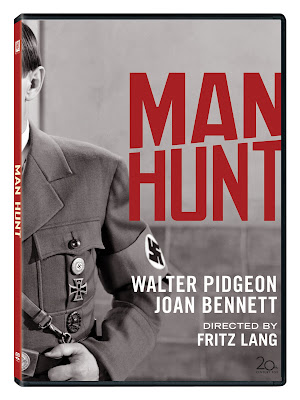 DVD Review: Man Hunt (1941)
Like Alfred Hitchcock’s Foreign Correspondent, Fritz Lang’s Man Hunt is another propaganda film designed to make the case that America should enter WWII. And, like Foreign Correspondent, it’s a taut thriller as well. The pre-war period was particularly fruitful for the spy genre because a Neutrality Act of the time forbade Hollywood from making films overtly advocating U.S. involvement in foreign wars. Since many filmmakers felt strongly about the subject (including British ex-pats like Hitchcock and Jewish directors who fled Nazi Germany, like Lang), they resorted, quite naturally, to covertly advocating such involvement. And what better vehicle for a covert argument than a story of covert operatives? Espionage films, in which wars could be fought by men in long coats and hats instead of by soldiers, proved the perfect genre for covert propaganda.
Like many a Hitchcock film of the period, the hero of Man Hunt is not a government agent. Instead he is an ordinary English citizen who becomes embroiled in international espionage. Specifically (and this is important), he is a pacifist (reflecting America’s neutral stance on the war) who can’t avoid being caught up in a conflict much larger than himself. At first his involvement is involuntary, because he’s got no choice, but in the course of the film he develops strong ideological convictions leading him to willingly stand up to fascism. 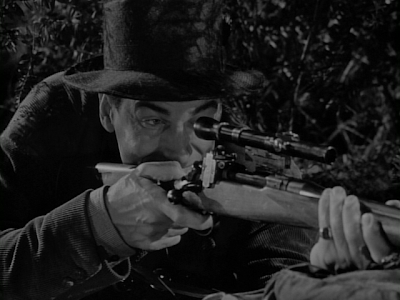 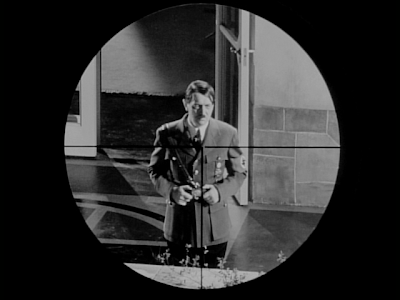 None of which is to say that renowned big game hunter Captain Thorndyke (the thoroughly engaging Walter Pidgeon) has anyone but himself to blame for the situation he finds himself in. You see, he thought, in the name of the hunt, and sportsmanship and whatnot, that having mastered all of Africa and shot every animal imaginable, he would hunt the most dangerous game of all: man. Not just any man, but the most vile and most protected man in the world: Adolf Hitler. And so he creeps into Hitler’s compound shortly before the outbreak of the Second World War, and gets the dictator in the sites of his high-powered rifle. He’s then caught in this highly incriminating (to say the least) predicament, and interrogated by top Gestapo man Quive-Smith (a monocled George Sanders). Quive-Smith is also a big game hunter, and familiar with Thorndyke. Thorndyke tries to explain it was merely a "sporting stalk." He doesn’t even shoot animals anymore, he says, because once he’s got them in his site, the outcome is a mathematical certainty. And he wasn’t planning to shoot the Fuhrer. Is he telling the truth? Sanders certainly isn’t convinced, and the audience will have to wait the whole movie to find out. But true or not, Thorndyke naively believes that this excuse will get him out of trouble. It doesn’t, of course. Quive-Smith wants him to sign a document saying that he was acting on the orders of the British government, thus paving the road for the war that Germany so desperately wants. Thorndyke refuses to sign, and actually seems surprised that such a refusal results in torture. (I guess people weren’t as familiar with Nazi methods back then as they are now.) This being a 1941 film, the torture isn’t actually shown, of course (Casino Royale-style), but Lang powerfully implies it by showing only Thorndyke’s shadow, tied to a chair, as Quive-Smith interrogates him. 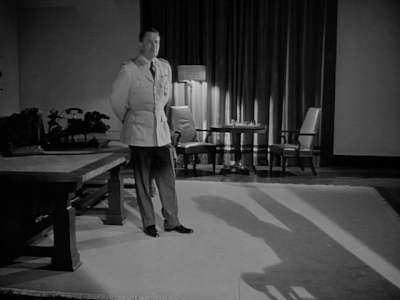 Thorndyke manages to escape eventually, and ends up on a Scandinavian ship bound for London, thanks to the sympathetic British cabin boy (Roddy McDowall). Unfortunately, a sinister, cadaverous Gestapo agent played by the ever-menacing John Carradine books himself on the same ship, unsatisfied with the police search of the vessel. As soon as Thorndyke gets off the steamer in London’s fog-enshrouded dockland, he’s a quarry. He’s gone from being the hunter in a foreign land to being the hunted in his own land. London’s fog is positively crawling with Nazi agents, all out to get him.
This foggy, unfriendly urban environment, of course, is Lang’s ideal playground, and the director who left such an indelible mark on the film noir genre excels at creating an overbearing atmosphere of dread and suspense. He also orchestrates some very exciting chase scenes as the Nazis remain on Thorndyke’s heels wherever he goes. 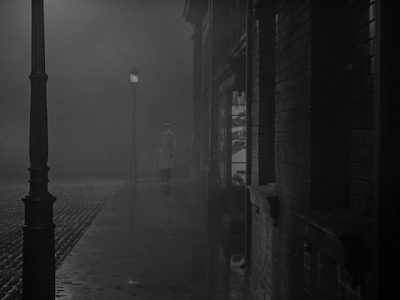 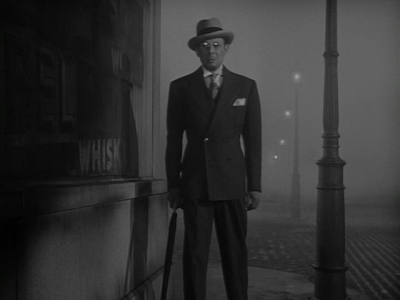 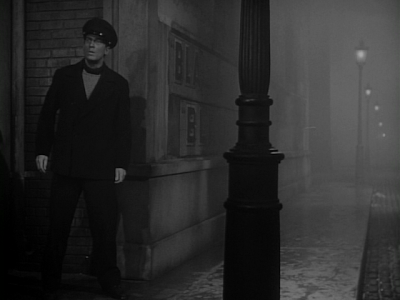 Taking cover from his enemies in a dockland tenement, Thorndyke meets Jerry (Joan Bennett), a young cockney woman who helps him out and ends up on the run with him. At this point the movie starts to resemble one of Hitchcock’s "man and woman on the run" pictures, like Young and Innocent. Especially Hitchcockian is the humorous interlude where the pair call on Thorndyke’s brother and his wife, a Lord and Lady who live in a very swanky place–where Jerry clearly doesn’t fit in. As the movie turns momentarily playful and then oddly romantic (laying on the treacle a bit thick, in fact, in the My Fair Lady subplot), the audience is lulled into a very false sense of security. Things may seem like a lark for a bit, but there are absolutely no guarantees here that the hero and heroine will both come out alive. Not when either one of them might prove more useful to Lang as a martyr to the cause of rallying American interest in entering the war. Newspaper stories about faraway deaths in Poland or London may seem remote, but kill off an appealing Hollywood hero or heroine, and you’ll win over some hearts and minds! 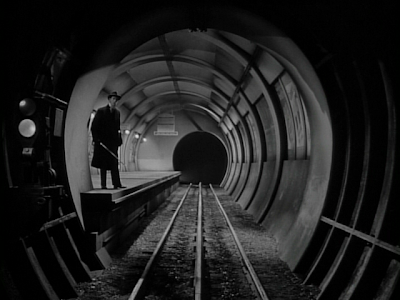 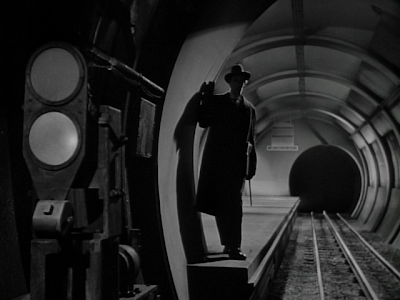 As the suspense ramps up, the Gestapo closes in around Thorndyke, the great hunter now very much the prey. (And they use pigeons to communicate with each other as they do so!) "I’m afraid of the city," confesses the hero. "Afraid of people I can’t see." That might as well be Lang’s mantra, as it summarizes a theme prevalent in his work from the very beginning and on full display in his earlier and later masterpieces like Metropolis and The Big Heat. In the Man Hunt’s most thrilling–and visually arresting–sequence, Thorndyke is pursued into the London Underground by Carradine’s menacing enemy agent, who wields a sword stick. Only one of them will emerge from the Tube. Meanwhile, Jerry turns on the light in her apartment to find George Sanders and his minions waiting for her. But the light doesn’t reach Sanders; it can’t penetrate his evil. He remains a silhouette bathed in shadow, except for the light reflected off of his very German monocle! It’s an eerie shot–and portentous. 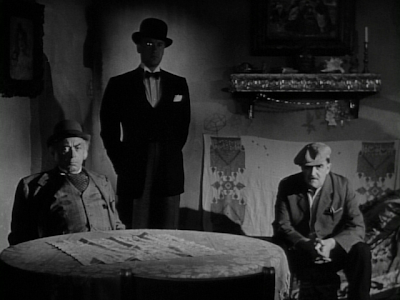 I don’t dare spoil the genuinely surprising action of the third act, but for a film that’s essentially a Trojan horse carrying Lang’s message about the dangers of Nazism in Europe, that message is probably more important to discuss than the plot. The movie abandons all pretenses of "neutrality" by its conclusion, boldly pronouncing–in 1941, mind you, still prior to America’s entrance into the war–that Hitler is "guilty of hatred, intolerance and murder!" Lang knew of what he spoke, having fled Hitler’s Germany himself. The movie concludes with an image of hope–hope that individuals and the world at large can stand up to Hitler. It’s a stirring ending that could only be filmed at that particular moment in time, and it locks the movie firmly into the time in which it was made, making it an essential time capsule for WWII-era history buffs. Like Foreign Correspondent, Man Hunt is fascinating both as propaganda and as cinema in its own right. Neither aspect overshadows the other, and both work in harmony to create a historical document that's highly entertaining to watch. It's well worth seeking out for fans of the spy genre and students of history alike. 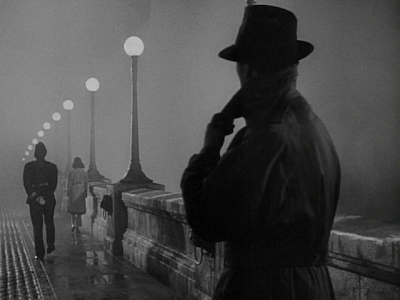 Had Fox’s DVD come out a year ago when it was originally supposed to, it might have gotten the "Fox Cinema Classics" treatment, complete with one of those nice, eyecatching slipcases that made those discs so attractive. But now, in this economy and this crappy market for catalog titles on DVD, cardboard slipcases are a luxury the studio apparently cannot afford. Luckily, even without the lavish packaging, there are still a nice amount of special features included. Foremost among them is "Rogue Male: The Making of Man Hunt." This short documentary focuses on author Geoffrey Household’s original novel, Rogue Male (filmed again under that title decades later starring Peter O’Toole), and on Fritz Lang himself. An impressive array of Talking Head experts (including the ubiquitous but always informative Drew Caspar and Kim Newman) brief us on his life and his politics. I had no idea that despite his Jewish ancestry, he had been asked by Hitler to head up the Nazi film project prior to (and thus precipitating) his flight! The experts also do a good job of situating the film historically, which is almost essential for modern viewers. Finally, they situate it within Lang’s own canon as well. "The other thing about it," remarks one of the experts (whose chyron I sadly didn’t catch), "is that it involves spies. Fritz Lang was the pioneer and he was returning to that in Man Hunt really for the first time since he left Germany."
The commentary by Lang biographer Patrick McGilligan is more of a mixed bag. It’s clear that he’s reading his comments (and seems kind of nervous about it), but he does get more comfortable as the movie progresses. In fact, he seems to get a little too comfortable! He makes some surprisingly derogatory remarks about the film, his snarks sometimes slipping into an MST3K level of contempt. And he tends to pick on easy targets, like poor Roddy McDowall’s acting (c’mon, Patrick; he’s just a kid!) or Joan Bennett’s spotty accent. Or else he goes after the elements I liked best about the movie, like the enemy spies who he calls "stock villains" who could have come out of a comic book. When he’s not snarking, though, or making groan-inducing puns ("monocle a monocle"), he does provide some very interesting background material, particularly in comparing the film to its literary source. Apparently the book contained a lengthy flight across Germany before Thorndyke finally made it to the coast, which sounds pretty exciting. McGilligan also provides an intriguing fact that I had no knowledge of which will be of particular interest to readers of this blog: he says that Household himself was a British agent, inconveniently stationed in Romania just as his book was becoming a bestseller! (Then he kind of blows it by attributing that fact to the IMDB.) Despite his odd habit of insulting the movie he’s commenting on, McGilligan clearly knows his material, and the track is definitely worth a listen... but you might want to do some fast-forwarding. 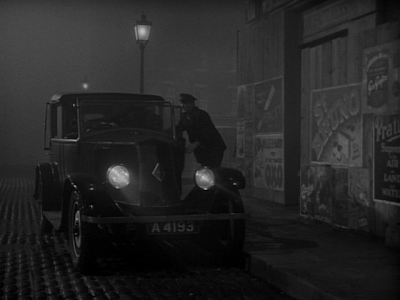 A trailer and three impressive galleries (advertising, stills and production artwork) round out the special features. There’s also the usual Fox restoration comparison, which isn’t quite as impressive as some of them, since the original film for the most part doesn’t seem too bad here. (Still, it’s certainly nice to have it restored!) Overall, Fox has done well by this forgotten classic, not only releasing it, but releasing it with a good assortment of extras. Fans of Lang’s film noir movies–as well as fans of Hitchcock’s spy movies of this era–should definitely check out Man Hunt.
Posted by Tanner at 12:50 PM