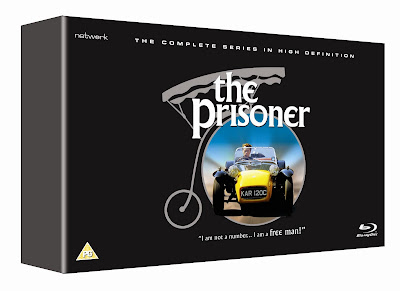 And hot on the heels of last week's artwork for A&E's American Blu-Ray, today we have Network's artwork for the UK Blu-Ray of The Prisoner: The Complete Series due out in September! (Click to view in ultra high resolution.) And, not surprisingly, it's very, very cool! I love to see Number 6's Lotus get some face time.

That box is a limited edition package for the six-disc set, and will retail for £59.99. Not only will it be the worldwide Blu-Ray debut of The Prisoner (hitting shelves a month before A&E's release), but it will also be the first ever Blu-Ray title from Network, whose extensive special features and high-quality transfers of classic spy TV series has made them an international leader–and favorite of spy fans–in the DVD format. (I sound like a press release there, don't I? I can't help it; I genuinely love this company's commitment to not only preserving but celebrating all those Sixties spy shows I enjoy so much, from the classic to the obscure.)

Network's Prisoner Blu-ray contains all of the extensive special features from their 40th Anniversary DVD collection, including the impressive feature-length documentary “Don’t Knock Yourself Out” (boasting loads of interviews with all sorts of key production personnel), the restored original edit of “Arrival” with an optional music-only soundtrack featuring Wilfred Josephs’ complete and abandoned score, audio commentaries from members of the production crew on seven episodes, trailers for all episodes, commercial break bumpers, behind-the-scenes footage (“including much previously unseen”), script and production documentation PDFs, extensive image galleries with music suites and an exclusive book on the making of the series by that font of knowledge on classic British TV, Andrew Pixley. In addition to the high-definition transfer, the Blu-Rays include 5.1 sound mixes on all episodes, taking full advantage of the medium! I'd say this set looks to be the definitive release of the series to date for videophiles. Look for it on September 28!
Posted by Tanner at 12:47 PM

Any idea what the region encoding on this set is? I am certainly intrigued and would opt for this edition over the U.S. edition given its bevy of extras.

That really does look beautiful with the Lotus featured in the design. Our talk of multi-region players is looming larger, especially when contrasting the Network and A&E packaging. I look forward to comparison reviews on the quality of the discs. Got my comic, by the way! Thank you!! :) -Jace (Spy Vibe)

Now, that's what I'm talking about! The lovely original typeface for the title and the penny-farthing motif; and the "KAR 120C" to boot. These Network people certainly know what they are fiddling with.

Again, thanks so much for this info. I've found your blog awesome.