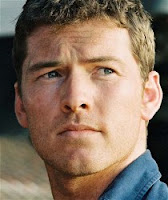 According to The Hollywood Reporter, Sam Worthington has been cast opposite Charlize Theron in Spyglass Entertainment's spy thriller The Tourist. As you may recall, this was one of the roughly three billion spy projects that Tom Cruise was loosely attached to earlier this year. before finally committing to a currently untitled one co-starring Cameron Diaz. As Cruise flirted with the picture, his favorite scribe Christopher McQuarrie did a rewrite on Julian Fellowes' original script, which in turn was based on the 2005 French movie Anthony Zimmer, which was written and directed by Jerome Salle. Worthington joins Charlize Theron, who has been attached since the Cruise days. The trade summarizes the plot as follows: "A female Interpol agent chooses an everyman American tourist visiting France and dangles him as bait in the hunt for a wanted criminal, who's also her former lover." I have to confess, I'm not really sure who Sam Worthington is. Sure, I hear his name all the time as he seems to be in a ton of movies coming out soon (including James Cameron's Avatar and the Clash of the Titans remake), and I know he was in Terminator: Salvation, so I guess Hollywood has decided that he's going to be a star. But I haven't actually seen him in anything, so I'm not really sure what to make of this news...
Posted by Tanner at 5:40 PM

I've seen Worthington in a few things, and rumour has it that his screen test/s for James Bond was only second to Daniel Craig.

So I guess now we get to see what kind of spy he makes - although from the description, it sounds like not much of one - if he is the innocent dupe!

Still, I am curious!