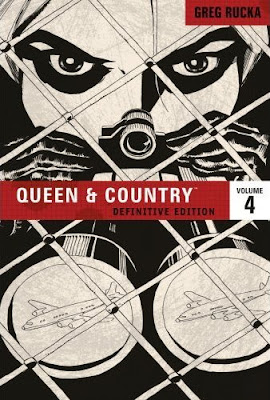 I somehow missed this bit a few weeks ago, but according to The Hollywood Reporter, the Queen & Country movie is still on track! That's great news! Not having heard anything about it for a few years (when Leverage's John Rogers was penning the screenplay), I had assumed that the film adaptation of my favorite spy series was dead in the water. But the trade reports that the movie version of Greg Rucka's comics and novels starring British agent Tara Chace is set up at Fox, and that Ryan Condal, who wrote last year's Black List script Galahad, is penning a new draft. "The project," they helpfully remind those who haven't read Rucka's work, "centers on a female Special Ops agent who is on the run after carrying out a high-level assassination in Eastern Europe. Those familiar with the project have described it as a female version of The Bourne Identity. [Behind Enemy Lines director] John Moore had penned a draft of Country, which Jenno Topping is producing and Peter Kang is overseeing for Fox." Hm, from that description I'd hazard that they're combining the first arc of the comic series with the first novel, A Gentleman's Game, which really isn't a bad idea. But while A Gentleman's Game in particular offers a lot of action, Queen & Country really isn't Bourne. I hope that's just studio shorthand, and that Fox isn't actually turning the best modern example of the more "realistic" school of spy fiction into a Bourne clone! Rucka's stories owe far, far more to The Sandbaggers than to Robert Ludlum.

All this is particularly topical because Whiteout, a film based on another Rucka comic book (the very one that introduced readers to Tara Chace, in fact, under the guise of Lilly Sharpe) opens in U.S. cinemas tonight–unfortunately to less than stellar reviews. I've been excited for the Whiteout movie since it was first announced (and reported here) more than two years ago, so I definitely plan on seeing it and formulating my own opinion. But the reviews are a bit discouraging. I would really hate to see Rucka's brilliant Queen & Country, which I've previously called the best ongoing spy saga in any medium, turned into a less than brilliant film. So here's hoping that Fox and Condal have a good grip on the material!

The Reporter mentions that Nicole Kidman was at one point attached to the project, which "is seen as a vehicle for a strong female lead." Judging from the tense used, she's no longer attached. A couple of years ago, I picked my dream cast for a Queen & Country movie... and I stand by my choices today. (Click here to see them.) While Kate Winslet would be good (as a commenter pointed out on that post), I still think that Kelly Macdonald is the best woman for the job–and her star has risen considerably since then!

Even if a potential Queen & Country movie is still a long way off, Mister 8's Armstrong Sabian alerted me that Rucka has officially confirmed on his blog that he's hard at work on a new Tara Chace novel! So there's that to look forward to, for sure. Still missing in action is a third Whiteout graphic novel announced in 2007 and now nearly two years overdue, but that sort of schedule is par for the course with Rucka and publisher Oni Press. The good news is, it's always worth the wait!
Posted by Tanner at 6:49 PM

Well with FOX being behind this expect what ever director they get to have their vision of the movie butchered. And I still stand behind my choice of Kate Winslet as Tara.