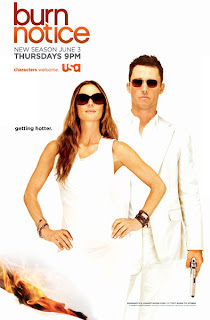 EW's Michael Ausiello reports that Burt Reynolds is joining the cast of Burn Notice... at least for one episode.  According to Ausiello, Reynolds will play another ex-spy who was also burnt by the CIA and serves as a cautionary example to Michael Westen in at least one fourth season episode.  “He’s not precisely like Michael,” series creator Matt Nix tells EW. “He’s Michael should Michael succumb to some of the demons that haunt ex-spies.” The fourth season of Burn Notice kicks off soon, returning to the USA network on June 3.

In other spy TV news, Ausiello also asserts that a fourth season pickup is likely for NBC's constantly on-the-bubble fan favorite Chuck, but that Fox's bubble quasi-spy show Human Target is potentially in trouble.  Then again, I've heard from other sources that Human Target is a lock for renewal, so I guess no one really knows.  We'll find out when Fox announces its fall schedule later this month.
Posted by Tanner at 1:24 PM

This new Human Target has nothing to do with the source material so who cares? They might as well call the show "Action Guy".

True... but I like an "Action Guy" show! The new Human Target certainly isn't high art, but it's an awful lot of fun. I like having an action show on the air that doesn't take itself very seriously. They did a whole Indiana Jones-type episode that reminded me of the one Magnum did in its final season. It was full of jokey references and they even named an archaeologist "Doug Slocombe," which I definitely appreciated. It's cool to have a totally mindless action show to dip into each week without worrying about any ongoing continuity you have to keep track of. An 80s throwback. For that, I like it.

That said, I've read all the Human Target comics and I was one of the few loyal watchers of the early 90s show (although I suspect it wouldn't hold up), and you're right that the new one bears little resemblance. But the concept of the comic (in which Christopher Chance disguises himself as his clients to draw out their enemies) honestly doesn't really work for TV, because it would essentially call for a different guest star to play the lead each week instead of a leading man. So I can understand the decision to change it--although it is kind of odd that they bothered with the rights to the title and didn't just call it something else! The new comic that DC did based on the show version of the character is a surprisingly good read, though.