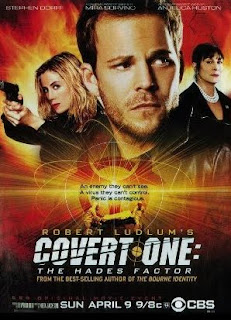 .  Covert-One was one of those series so popular in the late 90s and early 2000s created by a big name author whose name could be splashed across the cover, but written by or "with" a succession of other writers.  (Tom Clancy and Clive Cussler both figureheaded such series as well.)  I always assumed that the name writers in question had little to do with these series beyond cashing a paycheck, but Ludlum's first co-writer, Gayle Lynds (a very popular spy novelist in her own right) has an interesting article on her website about working with Ludlum that would seem to dispel such cynicism.  This excerpt, for example, would certainly seem to indicate a legitimate collaboration between two talented spy writers:


Because Bob did not type, and no one can write a book on the phone, we did everything by hard copy, passing the manuscript back and forth, which worked out rather well. Each of us had idiosyncracies. For instance, Bob disliked naming weapons. On the other hand, when I do the research, I like to share interesting bits with the reader. So the compromise was that we named the weapons of which I was most fond.

Reading that makes me think that perhaps I should give this series (or at least its early entries) a try one day! The first Covert-One novel, The Hades Factor (with Lynds), was published in 2001.  Presumably Ludlum also had some input in 2001's The Cassandra Compact (with Philip Shelby), but it's difficult to say how much involvement the late author could have had with the six further posthumous novels in the series.  (The newest, The Infinity Affair

, by James H. Cobb, is due out next year.)  I suppose it's possible that he did at least outline a number of plots for the series while he was still alive.

Anyway, why would Marshall choose to develop a series the majority of whose novels seem unlikely to have had much actual Ludlum input?  Well, for one thing, Marshall has never stuck close to the author's texts with the Bourne series, so that probably doesn't matter too much to him.  But there is another reason that's bound to make Covert-One attractive to the producer/director, and to Captivate Entertainment, the Universal-based production company that controls the rights to Ludlum's estate: Covert-One is an obvious franchise.  Ludlum himself didn't author many series, and the ones that he did (excluding his parodic "Road" novels) are already spoken for: the three Bourne novels, and the two Materese books.  Obviously (especially given the success of the Matt Damon Bourne films), the idea of a series with ten titles to cull from must be a very appealing one.

The Covert-One novels center on a team of scientific specialists recruited from various branches of the military and intelligence community tasked with thwarting the most dangerous conspiracies threatening America and the world.  The Hades Factor was previously adapted into a miniseries for CBS in 2006, starring Stephen Dorff.  (The subseqent DVD cover was obviously designed to attract Bourne fans.)  That shouldn't stop Marshall from remaking the story, however; The Bourne Identity had also been a miniseries before it was a film.

Whatever the source, I'm always thrilled to read about a new Robert Ludlum property being developed as a film.  We can now add this one to a long list that includes The Matarese Circle (apparently stalled along with the next Bond movie due to MGM's troubles), The Parsifal Mosaic, The Chancellor Manuscript, The Sigma Protocol, that remake of The Osterman Weekend and a potential fourth Bourne film.  I just wish that one of them would get past the development stage and actually get made, though!  Maybe this Covert-One movie will be the one.

Meanwhile, the next of Eric Van Lustbader's Bourne continuation novels, The Bourne Objective (good title), comes out on June 1.  I haven't read any of those (and don't really have any interest in them), but it's hard to believe there have been five of them already, far exceeding Ludlum's own output about the character.
Posted by Tanner at 6:06 PM