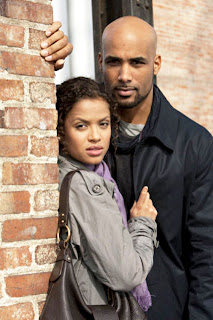 NBC has released a 5+ minute-long trailer for J.J. Abrams' eagerly anticipated new spy series, Undercovers.  All the footage seems to come from the pilot, which is the first TV pilot Abrams has directed since Lost.  (In the interim he's been dabbling in features, I hear, including a spy sequel and some sort of small, arty space movie.)  My feeling is that it may have been a mistake making it five minutes (and you must bear in mind that it was designed for the network's upfront presentation unveiling its fall lineup to the media, not for TV broadcast) may have been a mistake.  In trying to let the story develop fully, the trailer might breathe a little too much.  All of the spy stuff looks great (if possibly a bit too derivative of Abrams' prevoius spy series, Alias), but the domestic bits about this husband and wife spy team aren't working for me. And they do smack a little too obviously of Mr. & Mrs. Smith, True Lies, and other previous domestic/spy hybrids.  (Remember that early 90s series about married spies called Under Cover?  Or the Dennis Quaid/Kathleen Turner/baby FBI movie Undercover Blues?) I do like the look of Gugu Mbatha-Raw; she has the same combination of sexy and capable that's made other Abrams heroines so appealing.  I'm less sold on Boris Kodjoe and his too-perfectly trimmed beard. Of course, all this is just a gut reaction based on five plus minutes that were never meant to be strung together the way they were.  I maintain faith in Abrams (whose pilots for Alias and Lost were probably the two best pilots of the last decade), and I'm excited to see such a high-profile spy show on the fall schedule. Anyway, see for yourself–and form your own conclusions.