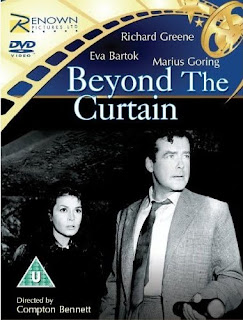 New Spy DVDs: Beyond The Curtain

Here's one I missed that came out in England a few weeks ago, but Camps at the Eurospy Forum provided the heads-up: the long sought-after 1960 British Cold War thriller Beyond the Curtain has been released on PAL Region 2 DVD in the UK.  When German-born stewardess Eva Bartok's plane is forced down over East Germany, she is trapped behind the Iron Curtain due to her alien status. British flight officer Richard Greene decides to bypass the red tape and bureaucratic hurdles and get her across the border himself... putting them both in peril of the dreaded East German secret police, the Stasi.  The no-frills DVD from Simply Media is available from Amazon.co.uk for £12.99.
Posted by Tanner at 2:50 AM