I just learned from Bish's Beat that Modesty Blaise author Peter O'Donnell has passed away, a week after celebrating his 90th birthday.  Ironically, this decidedly uncool news comes from Bleeding Cool, who have posted a good obituary here.

Peter O'Donnell hated it when people simplified his greatest creation, Modesty Blaise, into "a female James Bond," insisting that she was not, in fact, a spy, but an adventuress and a reformed master criminal.  While it's true that reducing a character as dynamic and original as Modesty Blaise to "a female James Bond" does her a disservice, disowning that connection entirely actually does O'Donnell a disservice.  He should not be overlooked by any students of spy fiction; Peter O'Donnell should be long remembered for making a crucial contribution to the genre: he created the first female superspy to permeate popular culture.

Even if she wasn't technically on the government payroll, Modesty Blaise frequently used her unique skills to aid Sir Gerald Tarrant, head of the British Secret Service.  That alone would qualify her as a spy in my book, but beyond that fact, the qualifications for spydom in the Sixties had more to do with the image a character projected and the lifestyle he or she embodied than with semantics.  There was more to James Bond's popularity than just his profession; he was the embodiment of cool as defined by the consumerist Jet Age.  It's this trait that any of his imitators took on, from filmdom's Derek Flint to Matt Helm to Diabolik to Bulldog Drummond (in his Sixties incarnation), none of whom were actually operational secret agents.  (Flint and Helm were both retired in their respective film series, persuaded again and again to come back.)  It's this trait that made spy surrogates out of many an insurance investigator in the Eurospy genre.  It's this trait that was specifically rejected by the spy writers who considered themselves the anti-Flemings (Harry Palmer and George Smiley are both spooks, but neither one is glamorous), and it's this trait that affords private adventurers and criminals (reformed or not) like Diabolik and Modesty Blaise membership in the Spy Club.  From the novels and comic strips penned by O'Donnell to the feature film

The slinky, catsuited adventuress debuted in a comic strip

written by O'Donnell and drawn by Jim Holdaway in 1963, the year after TV's Cathy Gale and two years before TV's Honey West (an altogether different figure from the Honey of novels), forming a trinity of commanding, sexually liberated, catsuited women of action.  In 1965, O'Donnell wrote a script for a Modesty Blaise movie, then turned his script into a novel

which came out before the film.  The film ended up bearing little resemblance to O'Donnell's book (in fact, from a story standpoint it's virtually incomprehensible, though from a style standpoint it's sublime) and flopping at the box office, both to the author's dismay, but the book sold well and launched a series.  In all, O'Donnell published eleven Modesty Blaise novels and two collections of short stories from 1965 to 1996.  1996's Cora Trap formed a definitive end to Modesty's print adventures, but O'Donnell continued to write the comic strip until 2001, when he retired.  Following Holdaway, John Burns, Pat Wright, Neville Colvin and, for the longest duration, the great Enriqe Badia Romero handled the art chores.  O'Donnell wrote every single Modesty Blaise story himself.

Peter O'Donnell drew on his own wartime experiences in the Royal Signals Corps for Modesty's background.  He vividly remembered seeing a young girl, alone, fending for herself in a displaced persons camp, and that (according to his introduction to one of Titan's volumes of Modesty Blaise comic strip reprints) became Modesty's origin.  But Modesty herself wasn't the only memorable character to appear in the series.  Modesty's (mostly) platonic relationship with right-hand man Willie Garvin formed the backbone of the comics and novels, and will surely be remembered as one of the all-time great literary partnerships.  (Kingsley Amis compared the pair to Holmes and Watson.)

of Ian Fleming's James Bond novel Doctor No, wrote the 1968 Hammer movie Vengeance of She, and wrote a series of swashbuckling romance novels under the pen name of Madeleine Brent. 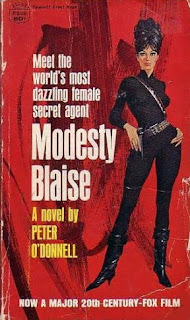 Besides Joseph Losey's Sixties film, O'Donnell's most famous creation starred in a TV pilot in the early 80s (in the guise of Ann Turkel) and a 2003 direct-to-DVD film produced by Quentin Tarantino called My Name is Modesty

for DC Comics in the 90s, drawn by Dick Giordano.  A new Modesty Blaise movie is perpetually rumored (usually with Tarantino's name attached in some capacity), but has yet to materialize.  Personally, I hope it does, because the character deserves to live on, but even if there's never another movie, Peter O'Donnell's fantastic creation will always live on in his books (all of which are now back in print courtesy of Souvenir Press) and comics (Titan continues to reprint them in trade paperback, most featuring story introductions by O'Donnell). Furthermore, Modesty Blaise lives on in virtually every female action heroine created since the Sixties, all of whom owe her a debt. O'Donnell made an indelible mark on the spy genre, and leaves a lasting legacy.
Posted by Tanner at 1:40 PM