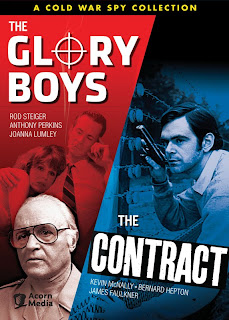 It's a good week for spy releases!  There are several ones of note.  First up, from Acorn Media we ge two rare Eighties British spy TV miniseries–one previously available

and one long sought after by fans.  The two-disc set A Cold War Spy Collection includes The Glory Boys (1984) and The Contract (1988), both written by espionage specialist Gerald Seymour.  The Glory Boys, which was originally broadcast in the United States on TBS, features Anthony Perkins as a British intelligence agent tasked with stopping a joint IRA/Palestinian hit team out to kill an Israeli nuclear scientist (Rod Steiger) in London. New Avenger and Bond Girl Joanna Lumley co-stars. The rarer The Contract follows a British agent sent to bring a Soviet defector across Germany and into the West, testing familial and political loyalties on both sides of the Berlin Wall. 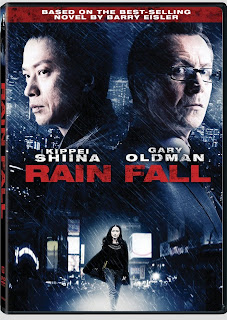 Ever since shooting was announced way back in early 2008, fans of Barry Eisler's novels have been eagerly awaiting a U.S. theatrical release date for the Japanese film adaptation of the Tokyo-set first novel

in the author's spy series featuring assassin John Rain.  Sadly, it looks like Rain Fall won't get a theatrical release here, but as of today we have it on DVD, at least, from Lionsgate Home Entertainment.  The movie (which was originally intended to be 85% in Japanese and 15% in English, but I have no idea if they stuck to that plan or not) stars Kippei Shiina as the titular Japanese-American former Special Forces operative turned killer-for-hire and Gary Oldman as a the CIA's shady Tokyo Station Chief.  According to the plot description for the DVD, when the CIA targets a woman Rain loves, his world starts to fall apart.  The only extra appears to be cast and crew interviews. Retail is $26.98, though it can be found cheaper on Amazon 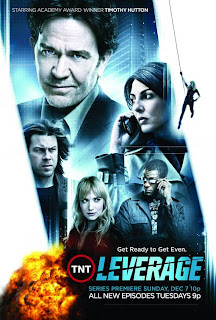 Finally, from Paramount we have Leverage: The 2nd Season.  While not quite a "spy show" per se, Leverage remains the closest thing on television to the original Mission: Impossible.  In fact, in its second season it's more Mission than ever!  (In one episode, for example, they convince a phony psychic that one of their team is a real psychics.  How many times did Jim Phelps's team pull that one?)  Besides including all fifteen Season Two episodes, the set also contains copious extras.  Among them: commentary on every episode, a Q&A with the show's creators, a set tour with executive producer John Rogers, a "Behind the Boom" featurette, a music featurette, a gag reel and a spoof video entitled "The Hand Job."  (Every episode is called "The [Something] Job.") The cover art for the DVD is not that poster artwork to the left, because that would be too awesome.  Instead, it's an amateurish Photoshop job so ugly that I didn't want to post it here, but you can see it on the Amazon listing.  Luckily, I assure you that the quality of that cover art does not reflect the entertaining show contained within!
Posted by Tanner at 5:21 PM