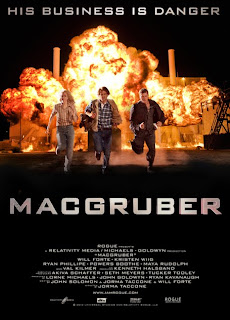 At first glance, MacGruber seems like a very strange movie to even exist. It’s a feature film spinoff of a Saturday Night Live sketch that usually runs under a minute and always ends with the characters blowing themselves up. Furthermore, the sketch is a parody of a TV show (MacGyver) itself two decades old, so the material is hardly timely! And the last SNL spinoff film that was successful–or funny–was Wayne’s World 2 in 1993. That said, writers Will Forte, Jorma Taccone and John Solomon and director Taccone have succeeded in turning MacGruber into a pretty entertaining comedy. They key was in basically ditching the MacGyver premise, and instead re-purposing the character to craft a parody of spy movies and action movies–especially the testosterone-fueled 1980s variety exemplified by such guilty pleasure schlock as Cobra, Commando and Rambo III. You could easily film the script of Cobra today with no alterations and make it a hilarious comedy, it’s so over-the-top and of-its-era. Probably sensing that, Taccone wisely lets a lot of the comedy in MacGruber flow from the mere use of genre cliches that require little augmentation to be funny. For example, the exchange “The game has changed!”/”But the players are the same,” dialogue which could easily come from a real action movie, is used twice–hilariously–with different inflections that call attention to the fact that the words themselves basically mean nothing.

The homoeroticism of those macho Eighties movies may be an easy target–but it’s impossible to resist and still funny. This is exploited primarily during a lengthy sequence early on in which MacGruber goes around recruiting his old, muscle-bound compatriots to build “a dream team of killer-stoppers” to combat the “dream team of killers” that’s been assembled by the villainous Von Kunthe (Val Kilmer). Kilmer himself (and his Eurotrash hair) is one of the funniest things about the movie, but he’s ultimately underused, which is a shame. I think Kilmer’s always been better at comedy than straightforward action. In fact, the wretched Saint movie that he starred in is the other sort of movie MacGruber sends up: trite, generic sub-Bond espionage actioners of the past few decades. To this end, we get some standard spy movie scenarios such as the “infiltrating the villain’s party” scene (mixed with a gaming table sequence that actually could have gone longer) and of course the tense “which wire do I cut?” bomb disarming scene. That one, like many of the film’s best gags, will already be familiar to anyone who’s seen the trailer, but it still generates laughs nonetheless. “There’s like a million wires here!” exclaims a flummoxed MacGruber when he busts open the compartment. “I’m more of a three wire guy.”

What’s the plot? Well, it really doesn’t matter, but basically MacGruber, a proudly-mulleted former Navy Seal, Army Ranger and Green Beret who was the best of the best but has been in living in self-imposed exile ever since Von Kunthe murdered his wife on their wedding day, is called back to secret active duty by a Pentagon bigwig (Powers Boothe) and paired with Breach’s Ryan Phillippe as a younger, straightlaced agent/soldier (the movie doesn’t really distinguish between the military and intelligence communities) to stop Von Kunthe from doing whatever he’s planning on doing with a stolen nuclear warhead. This takes him from one locations to another (designated by beepy text across the screen) in his red Miata in what seems like a matter of seconds. Along the way he hooks up with a synth-based musician/lyricist/love interest named Vicki St. Elmo (the always-funny Kristen Wiig) with a penchant for outdated Eighties fashion to match his own. All of this is accompanied by the appropriate sort of Eighties rock soundtrack that could easily have accompanied Cobra itself, played mostly on MacGruber’s old-school removable car stereo, which he dutifully removes every time he parks.

While some of the subtler jokes prove to be the funniest (the rapid, unexplained changes of location, the poster-sized portrait of Ronald Reagan right out of Cobra’s office, the smoke and fire and sax-filled warehouse where MacGruber toils away with a blowtorch to create the ultimate push-pin arsenal), the movie is also heavy on sophomoric, scatological humor–and that generally works too. I’d be lying if I said I didn’t laugh at the image of Forte prancing around with a stick of celery sticking out of his butt–or a later callback to that image–in one of the odder jabs at MacGyver’s penchant for “making life-saving inventions out of household materials.”

There’s certainly nothing profound or even particularly intelligent in MacGruber (and I've probably devoted more words to it than the film really deserves), but as a silly send-up, it’s better than it has any right to be. It’s not as smart, sharp or spy-specific a parody as OSS 117: Lost in Rio (and if you only see one parody this summer, it should be that one), but MacGruber is still a pretty entertaining night at the movies (or, more appropriately, DVD rental), particularly if you have any affinity for those Eighties Stallone movies.
Posted by Tanner at 8:15 PM

I was going to give this a pass, but now I'm going have to make it a guys movie night outing...

Ease up on the "Cobra" bashing.

The duality of Cobra can be best summed up in the scene where he eats pizza. Is that badassery or comedy?

I think it depends on the pizza topping!

I always thought Cobra was a comedy

And the characters name is Marion (maybe a sly homage to The Duke), but c'mon, you've got the baddest guy on the planet named 'Marion'. Don't get me started about Reni Santori and Andy Robinson from Dirty Harry.

But I haven't watched it in years...I am sure it has dated badly, an Stallone films have always had the worst synth rock scores.