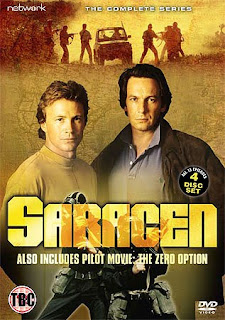 Network has announced Saracen: The Complete Series, a 1989 British action show, for release on DVD in the UK on June 7.  Touted at the time as an updated take on The Professionals, Saracen followed the exploits of former SAS and Delta Force commandos, respectively, David Barber (Christian Burgess) and Tom Duffy (Jimmy Clarke), now serving as the top operatives for the global private security firm Saracen Systems, whose clients include governments, industry and individual contractors worldwide.  According to Network's blurb, "under Saracen’s founder and director, retired army officer Colonel Patrick Ansell, the agents take on high-risk tasks too sensitive or unpredictable for other agencies to handle."  Saracen: The Complete Series, a Region 2 PAL release, includes for the first time ever on DVD both the 1988 pilot The Zero Option (with different lead actors) and all thirteen episodes of th 1989 series. I've been curious about this series for a while, so I look forward to the opportunity to finally see it!  The set will retail for £29.99, but can currently be pre-ordered on Network's website for just £16.99.

Fun trivia: According to a thread on the Commander Bond.net forums, Christian Burgess was once considered as a possible 007 for one of Kevin McClory's many attempts to make another rogue Bond movie in the 1990s.
Posted by Tanner at 6:43 PM

Believe me, SARACEN is a HUGE disappointment, and anyone expecting anything near THE PROFESSIONALS is in for a big let down.

Yes. I remember sort of loving Saracen at the time, even though, even at the tender age of 17 or so, I realised it was awful. The last two or three episodes are good, and the movie The Zero Option that launched it (an entirely different cast but the same characters, more or less - the only difference is that it's an Australian ex-SBS commando partnered with the Brit, rather than an American) isn't bad.

But it suffered from post-Inspector Morse-itis with very little action, very little character development or chemistry, and Saracen cocking up every episode. Looked good though - waiting for my review copies to come through!

Well, based on these comments and other things I've read about the series, I certainly won't be going into it with very high expectations. But I do still welcome the opportunity to at least be able to see it! And I've got to say, you have me quite intrigued, MediumRob, with your description of loving it even though you realized it was awful. I tend to like things that split people that way!

As I said in the first post, for me it was a big let down. There were actually a couple of halfway-decent episodes (and Ingrid Lacey is always worth watching...).

But overall the series for me was unbelieveably dull. It may be that now my tastes have changed of course and I'd like it more. Time will tell.

Ingrid Lacey, unfortunately, had precious little to do except walk around in a tight skirt - the Alice-Barber romance hinted at in The Zero Option didn't even get mentioned again until the final episode. But Ingrid Lacey in a tight skirt was still a good thing, and kept me going through the duller episodes...

I recant: I've seen them all again now and it was a whole lot better than I remember.