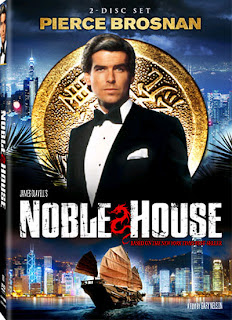 TVShowsOnDVD reports that Pierce Brosnan's consolation prize for missing out on The Living Daylights, the epic miniseries Noble House, will be released on DVD by Lionsgate on March 25. And they sure know how to capitalize on their star! In addition to emulating Fox's tuxedo-heavy approach with Remington Steele, the copy plays up the series' espionage angle: Brosnan plays Ian Dunross, Tai-Pan of a powerful trading company, who is "suddenly plunged into a criminal underworld of international espionage, deception and financial crises." As antagonist Quillan Gornt, John Rhys-Davies (The Living Daylights) heads up a cast of spy all-stars including Burt Kwouk (Goldfinger), Gordon Jackson (The Ipcress File), Nancy Kwan (Wonder Women), Khigh Dhiegh (Hawaii Five-O), Denholm Elliott (A Murder of Quality) and True Lies' Tia Carrere as "Venus Poon," a name that could easily have come right out of an Austin Powers movie. Based on the bestseller by James Clavell, Noble House is a favorite among Brosnan fans that I've long wanted to see even without realizing all the espionage angles! Now I'm really looking forward to this release.
Posted by Tanner at 6:01 PM

I had wanted to see this myself. I had heard of it, but never had a chance to see it. With seeing all the espionage aspects of it, I really want to see it.