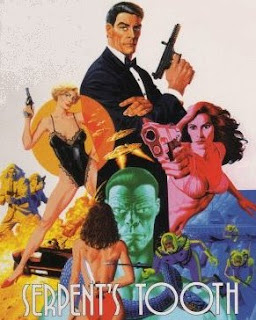 The New Year has me feeling a bit listy what with all the typical best of stuff, so why stop with yesterday’s list of looking back? Why not another list looking forward? But not to the stuff I mentioned yesterday, the stuff we know is happening, to the unknown! What would I like to see in 2008 in terms of spy media? Well, I’d like to see Devil May Care be good (fingers crossed), but that’s already written and waiting for our voracious consumption, so I won’t waste a wish on something so esoteric. Here’s my wish list for 2008, of the spy products I’d like to see appear:
Top 7 Spy Wishes For 2008
1. Kim Possible seasons on DVD
Come on, Disney, make it happen! They’ve been steadily releasing all their classic Disney Afternoon animated shows, and I think some of the recent ones like Lizzie Maguire even have season sets, so why not Kim, now that her run of new episodes is complete?
2. More Eurospy DVDs
I hope Dorado manages to get back on schedule and put out some of the other Eurospy titles in their catalog, like Assignment K and the long-promised Fuller Report, and I hope that other niche labels get in on the act and cash in on this largely untapped market. I’d really, really love to see Retromedia (or someone) put out a second volume of Kommissar X movies. I know it doesn’t help that sales weren’t great for the first batch, but I think with the right marketing approach someone could really find a way to exploit the abundance of titles out there. There are even some owned by big studios! Wouldn’t it be great to see a few Eurospy double features make it into Fox/MGM’s next wave of Midnite Movie double features?
3. Guillermo Del Toro’s Champions
Ever since that tantalizing, out-of-the-blue announcement, I haven’t been able to quell my excitement for the Pan’s Labyrinth director’s version of this ITC classic. Del Toro has stated in many interviews that his schedule is in constant flux, and there are clearly other projects that he’d rather make next. But The Champions’ basic concept (spies with superpowers) is one that could definitely do it, and based on his work on Hellboy and Blade 2, I’d say that Del Toro could pull it off, even if he seems an odd fit. There’s the potential for greatness here...
4. More A&E Spy DVDs
For years, A&E was in the forefront of releasing classic British spy shows on DVD in America. They’re still the only label anywhere in the world to issue the entire run of The Avengers! But in the past few years, they haven’t offered anything new. They’ve repackaged their Danger Man DVDs in a very appealing megaset, but where is The Champions, Vol. 2? Where are the rest of the black & white episodes of The Saint? Don’t leave us hanging, A&E! Finish putting those series out on DVD and then you can bundle them as megasets and sell them all again. It’s very frustrating to have incomplete runs of these series here as other countries and other regions get the whole thing. If a Del Toro Champions movie ever actually happens, I’m sure that would inspire A&E to finally finish that series. But don’t make us wait till then!
5. James Bond comics
Why have there been no original James Bond comic books since Dark Horse lost the license in the mid-nineties? 007 seems like a natural for the four-color treatment! There are probably more licensed character books on the market now than ever before, but no James Bond. The martini-swilling superspy would seem like a natural for Dynamite’s stable of quality licensed books (The Lone Ranger, Army of Darkness, Battlestar Gallictica, Darkman, Zorro), though I’d love to see him end up back at Dark Horse where they did such a good job with him in the Nineties. (The Moench/Gulacy Serpent’s Tooth (pictured) is a high water mark for 007 in comics.) The company is reviving their other dormant licensed superstar, Indiana Jones, in 2008, so why not Bond? With Daniel Craig having rejuvenated the film series, and Sebastian Faulks hoping to do the same with the books, it only makes sense!
6. Nick Fury comics
Not only do comics fans have no James Bond books on the shelf; we don’t even have the comic world’s equivalent! Marvel’s one-eyed superspy (created in the Sixties to cash in on the popularity of Bond and The Man From U.N.C.L.E.) sat out all of 2007 and most of 2006 thanks to big, dumb crossovers like "Civil War" and "World War Hulk." S.H.I.E.L.D. is omnipresent in the modern Marvel Universe, but it’s being run by Tony Stark (Iron Man) now, and its most famous agent is nowhere to be found. It’s time to bring him back! There have been rumors that this will happen in ‘08. I hope it does, and I hope Fury gets his own book again!
7. A Casino Royale Special Edition
The DVD Sony gave us, despite continuing to set sales records worldwide, is pretty bare bones. The only special features on Disc 2 are short featurettes and made-for-television promotional pieces. Where are the deleted scenes (we know from the trailers some exist!) and the audio commentaries with Martin Campbell, Michael G. Wilson, and Paul Haggis? (I really, really doubt Craig would do one.) Campbell has stated several times that a Special Edition was in the works, but it has yet to materialize. It would make sense for its release to coincide with the theatrical release of Bond 22 next fall, except that as I understand it Sony only has a narrow window left of DVD distribution for the title before it reverts back to MGM and Fox. I’m worried that if they don’t issue a Special Edition soon, they’ll end up deeming it financially unfeasible. So let’s see it, already, Sony! Take our money!
Posted by Tanner at 1:07 AM