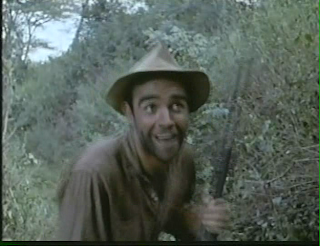 I just saw Tarzan’s Greatest Adventure (1959) for the first time last weekend. Beyond being "the Sean Connery Tarzan" (he’s a bad guy, not Tarzan!), it’s widely regarded to be the very best Tarzan movie. I don’t know if I’d go quite that far (I have a soft spot for some of the Weissmullers), but it is certainly among the best. Gordon Scott makes an excellent Tarzan, and has a lot to work with thanks to a very good script that adheres more closely to Edgar Rice Burroughs’ literary version of the character. This is an articulate Tarzan, not a grunter. 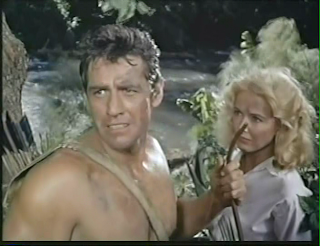 Scott is supported by one of the best casts ever to appear in a Tarzan movie, including Anthony Quayle as the villain, Slade, Connery as his drunk, psychotic henchman, O’Bannion, and Nial McGinnis and Al Mulock rounding out the gang. Actresses Sara Shane and Scilla Gabel are both as good as they are beautiful, which isn’t always a given in this type of jungle adventure. Shane is especially fetching as the daredevil aviatrix/adventuress forced to tag along with Tarzan on his jungle quest for revenge. I’m stumped as to why she didn’t have more of a career after this, other than a few American TV credits. She would have made a wonderful Eurospy starlet! Slade’s girl Toni (Gabel) did go on to do a few spy movies (including Modesty Blaise), as did Scott himself who capped his career with Segretissimo (1968). 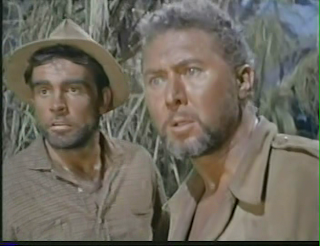 Producer Sy Weintraub must have asked himself, "What’s the only thing that could make Treasure of the Sierra Madre better?" and come up with "Tarzan!" In theory I’d say he was right in this hypothetical conclusion (it could be argued that there are few things Tarzan wouldn’t improve), but in practice even the Lord of the Jungle can’t make up for the loss of Bogie and Huston. Still, that formula leaves a surprisingly adult drama to unfold against the jungle backdrop, into which Tarzan fits well. When the gang, led by Slade, kills some of Tarzan’s friends in a raid on a town, Tarzan vows revenge and tracks them into the jungle. He and Slade have a history together, which makes Slade antsy (to the bemusement of his gang). All the while, there is tension among the gang over the diamonds they’re out to collect, and their own greed and in-fighting spell their doom. Ultimately the jungle does them in; Tarzan (as its human spirit) only helps. 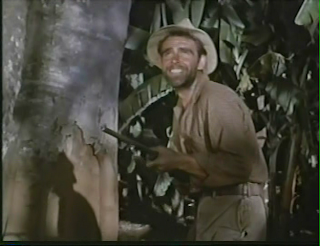 Connery, who was paid $5,600 for his efforts, is surprisingly good as the wicked O’Bannion, which turns out to be a much more sizeable role than I’d ever imagined. He was evidently impressive enough that Weintraub asked him back to play a different role in the next Tarzan movie (not the role of Tarzan, as some sources have erroneously reported over the years). According to Gabe Essoe’s definitive look at the Ape Man, Tarzan of the Movies, "Sean Connery was apologetic. ‘Two fellows took an option on me for some spy picture, and are exercising it. But I’ll be in your next,’ he promised, having no idea what would happen with James Bond." The rest, of course, is history.

Tarzan’s Greatest Adventure is a great Tarzan movie and a great Connery movie, well worth seeking out for fans of the actor. It definitely deserves to be on DVD, and it’s a shame Paramount hasn’t seen fit to release it. Perhaps they can use the release of Ind 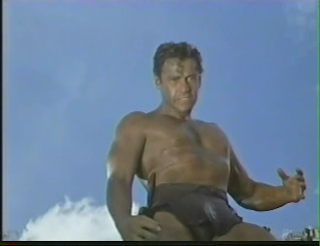 iana Jones and the Kingdom of the Crystal Skull as an excuse to dig into their archives for other jungle adventures, and release this and its sequel, Tarzan the Magnificent...
Posted by Tanner at 10:57 PM

While I enjoy the Weissmuller films, this is my favorite Tarzan movie by a wide margin and Scott is my favorite actor to ever play the part. He is without a doubt the closest thing to the character as described by Burroughs (intelligent yet feral). This is quite an adult thriller and that ending above the falls is outstanding!

This movie and its immediate successor, "Tarzan the Magnificent," are both of almost equal value and both feature Scott in another excellent turn as Tarzan. These 2 back to back productions represent the most adult treatment that the ape man ever received until Greystoke came along decades later and messed the whole formula up by getting its source material confused with Masterpiece Theater halfway through.

Anonymous said...
This comment has been removed by the author.
3:44 AM

You're right; she does resemble Sophia Loren! (Never a bad thing!)

Scott spoke in the pidgin English "Me Tarzan, You Jane"-type dialog in the four films he made that were produced by Sol Lesser. (That's including Tarzan and the Trappers, which was cobbled together from a couple of unsold TV pilot episodes.) When Lesser retired and Sy Weintraub began producing the series, Scott was allowed to speak whole sentences in Tarzan's Greatest Adventure and Tarzan the Magnificent. AFAIK, he has the unique distinction of being the only one to play both versions of the character.