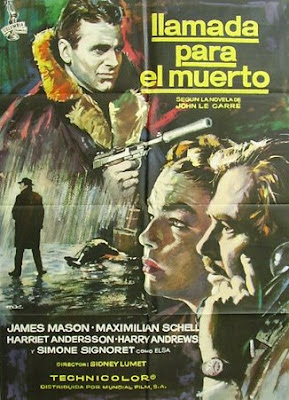 Attention, Los Angeles spy fans! The Egyptian Theatre in Hollywood is showing two hard-to-see Sixties spy films tonight, Saturday, January 12, 2008, starting at 7:30. The double feature, part of their "Overlooked and Underrated" festival of movies not available on DVD, is comprised of A Dandy In Aspic (1968) and The Deadly Affair (1966). I haven't seen either of these movies, but have long wanted to. A Dandy In Aspic stars Lawrence Harvey and Tom Courtenay (star of one of my very favorite Sixties spy flicks, Otley). Harvey plays an agent wrongly marked for death by both 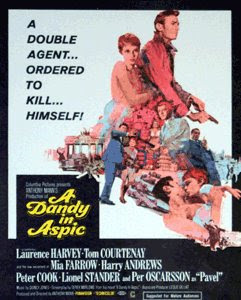 the British and the Russians, and Peter Cook co-stars. The Deadly Affair is an adaptation of the John Le Carré novel Call For the Dead (no idea why they changed the title) and stars the great James Mason as George Smiley... only he isn't called George Smiley. As Paramount owned the rights to that name Smiley (for The Spy Who Came In From the Cold), the character's name had to be changed to Charles Dobbs for the Columbia movie. Espionage regulars Harry Andrews and Maximilian Schell co-star.

Click here to enter the latest Double O Section contest and win The Wild Wild West on DVD!
Posted by Tanner at 12:53 PM