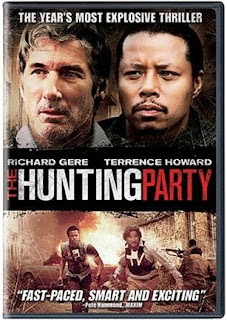 There are several new spy DVDs out today. From The Weinstein Co. comes The Hunting Party, director Richard Shepherd's follow-up to the brilliant Pierce Brosnan starrer The Matador. Richard Gere, Terence Howard and Jesse Eisenberg play a trio of reporters who spend their "summer vacation" off the books, searching for an elusive Serbian warlord. Adventure, terror and black comedy ensue when they're mistaken for a CIA hit squad. I missed this one in theaters, but I'm eager to check it out on DVD.
Fox/MGM packages three John Frankenheimer spy classics together with an early (non-spy)rarity from the director in The John Frankenheimer Collection. The four-disc set comprises The Manchurian Candidate, The Train, Ronin and The Young Savages.
Finally, CBS/Paramount releases Hawaii Five-O: The Third Season. Sure, it's a cop show, but it's actually got a lot of espionage-tinged episodes, particularly in this superior season. Read more about that below...
Posted by Tanner at 12:34 PM

Email ThisBlogThis!Share to TwitterShare to FacebookShare to Pinterest
Labels: DVDs