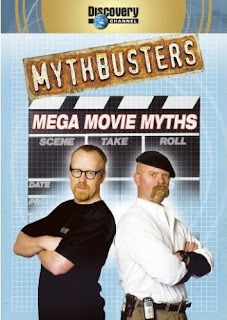 TV Review: Mythbusters James Bond Special
Last night’s new episode of the Discovery Channel series Mythbusters was Part 1 of a two-part James Bond special. Mythbusters follows a group of special effects experts who attempt to debunk (or validate) popular urban legends by recreating them (or spectacularly failing to do so). Movies are notorious propagators of such myths, and James Bond movies especially. I’d never seen the show before, but based on this episode it appears to be a very well-made cable reality series.
This episode opened with series regulars dressed in tuxes and gowns and other Bondian attire playing various spy-types in a short, silly skit. This was probably funnier if you were familiar with the hosts, but all of them seem amiable and their own obvious enjoyment of the scenario proved infectious. They chose several Bond "myths" to refute, then broke up into teams to formulate their test strategies. The show revisits each team several times throughout the episode, culminating in a stamp of "Busted" or "Validated." One team headed out into the desert with a load of firearms to try to explode a propane tank with a gunshot as 007 does in Casino Royale; another worked on recreating the boat jump from Live and Let Die to see if such a craft would truly remain seaworthy after jumping over J.W. Pepper’s police car, and tried to deflect a bullet with an electromagnetic watch like the one M gives Bond in that same movie. (As I’m sure you’ll recall, it was M and not Q who doled out the gadgets that one time!)
They were all charming and funny, and clearly enjoyed blowing things up and destroying speedboats. They remained dressed in their Bondian attire until such time as basic safety required a change of clothes. The desert team quickly proved that a 9mm round shot from a Walther P99 like Bond’s couldn’t possibly penetrate your average propane tank, let alone ignite it. But they didn’t stop there. They kept going with more powerful weapons (building up to a mini Gatling gun firing incendiary bullets!) until they got a nice big explosion... which singed the tux of their mannequin Bond! Likewise, it ended up taking way more electromagnets than could possibly fit in a wristwatch to actually alter the course of a bullet. The boat jump wasn’t entirely successful (though no less spectacular in its implementation!), but still managed to earn a stamp of validation. (Which should come as no surprise to Bond fans who know the stunt was done for real... even if it took, as the Mythbusters inform us, seventeen tries to accomplish!)
The producers evidently couldn’t afford the rights to use actual Bond film clips in the show (those can be expensive unless your special is made within the publicity window of the opening of a new movie), but they compensated creatively by animating professional-looking storyboards to recreate (or, in the case of the bullet deflection, create) the applicable moments from the series. Suitably appropriate music (sounding just different enough from the Bond Theme to avoid legal trouble) completed the effect–even if it occasionally ventured too far into surf music territory. The writers worked as many legitimate (and even impressive!) 007 references into the narration as they did cheesy puns ("That myth’s busted in royale style!"), and the narrator delivered them gamely. The Mythbusters James Bond Special proved to be a lot of fun, and one of the more entertaining Bond-related TV specials I’ve seen. It’s well worth tuning into Part 2 for Bond fans, or watching for a rebroadcast of Part 1. (Discovery appears to be airing it a lot this weekend.)
Posted by Tanner at 11:54 PM

Way cool! Will look for the rerun over the weekend. Sounds enjoyable.

Tanner, in LALD, M did not provide the watch to Bond. M brought the watch from Q Branch, as Bond had it in for "repair", probably to have it magnetized. Just and FYI.
-Scott

Sorry, Scott, but I stand by my statement that "it was M and not Q who doled out the gadgets that one time." It was M who personally delivered it to 007, or "doled it out." True, it was on behalf of Q. I didn't mean to indicate that M created the gadgets himself!

Hi Tanner! No worries. I'm easily confused. At 42, I am still working on walking and chewing gum. LOL!

Sorry folks but it was neither M nor Q who ‘doled out’ the gadgets to 007 in LALD. Rather the honour goes to sweet old Miss Moneypennny (we miss you Lois Maxwell) who handed Bond his wristwatch that does more than telling time.

Ha! You're right. Mea culpa; it was Moneypenny. Poor 'Penny! I forgot about her! As for the whole deflecting a bullet thing, since Q never said it himself, I always liked to believe Bond got that detail wrong, even before the Mythbusters proved it couldn't be done...

MythBusters is my favorite tv show. I Watch Mythbuster Online daily. Its amazing, So Entertain yourself with watch all your favorite episodes of MythBusters episodes online.

The Amazing tv show is such amazing show as its name. I watch The Amazing Race online daily.The Amazing Race is an American reality game show in which teams of two or four race around the world against other teams.