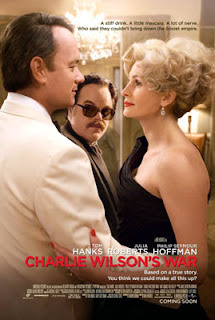 Charlie Wilson's War is a glossy, entertaining, fun–and ultimately flawed–holiday blockbuster. It's highly enjoyable as it goes along, but leaves a frustrating aftertaste. The Mike Nichols film tells the incredible true story of a congressman (Tom Hanks) of no particular scruples who formed an unlikely alliance with a "right wing nutjob" socialite (Julia Roberts) and a maverick CIA agent (Philip Seymour Hoffman) to wage a covert war on the Russians in Afghanistan during the 1980s. What’s incredible about the story, however, is that it happened, not really how it happened. And that makes for a troublesome screenplay, courtesy of Aaron Sorkin, adapting the non-fiction book by George Crile.
The main problem is that, by adhering to the facts, Charlie doesn’t really have to overcome any obstacles to wage–and win–his war; he just has to follow the right steps. And you see them all in the trailer: Charlie connects with Gust Avrakotos (Hoffman), the one CIA man who cares about Afghanistan. Charlie meets with the President of Pakistan. Charlie arranges a secret arms deal between Pakistan and Israel. And... voila. That last step, in particular, seems like a tough one, but not so in the movie. The Israeli arms dealer hems and haws for a moment, then capitulates in the very same scene and shakes hands with the Pakistani. When Charlie needs the help of other senators, well, that’s not a problem because he conveniently holds the most IOU’s in Washington. Even when Charlie comes under investigation by ambitious prosecutor Rudy Giuliani (and you think he’s going to need Gust’s expertise to get out of it), the problem just suddenly goes away, off-screen and unearned, and Charlie (and the audience) is informed by one of his staff. 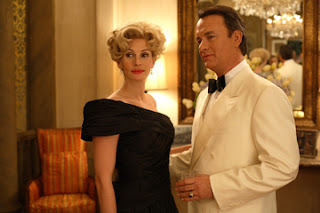 Sorkin and Nichols attempt to deal with this lack of obstacles by adopting a light-hearted caper tone for the movie. The actors are game for this, and all fun to watch, and we end up with a lighter-than-air Ocean’s 11 kind of movie about arming the future Taliban. If Nichols and Sorkin could have left it at that, and relied upon the intelligence of their audience to add the irony by pausing after they cheer for the Mujahaddin with the Stinger missile and then say, "Wait a minute! I know what happened after that!" then Charlie Wilson’s War would have been a deft and truly subversive political black comedy, in the vein of Dr. Strangelove. But instead, they assume no intelligence on the part of the audience, and tack on a coda beating the viewer over the head with the message: we won the war but failed the long peace. Or, to quote Charlie directly, "those things happened, and they were glorious, and then we fucked up the end game." (It is a good quote; I can see why they wanted to use it...)

It’s hard to view true history of this nature–with such a direct bearing on today’s geopolitics–as popcorn entertainment. But if you’re willing to do so–and willing to be lectured about doing so at the end–then there’s a lot to like in Charlie Wilson’s War even if it’s not as ambitious as it should have been. In fact, it offers up most of the ingredients readily associated with a good Sixties spy caper: beautiful women (and lots of ‘em, courtesy largely of Charlie's handpicked staff including Alias' Rachel Nichols and a superb Amy Adams, as well as Emily Blunt as a Wilson conquest and the stunning Tracy Phillips as a belly dancer), a suave, chauvinist hero prone to drink, exotic locations, witty one-liners, light-hearted skulduggery, the odd explosion, and even a few gadgets (Gust bugs Charlie’s drink at one point), all elegantly shot with an eye-popping technicolor palette. Even better than that, it offers Hollywood’s biggest stars being charming. If you’re willing to let yourself be charmed for a mercifully fast ninety minutes (such a welcome relief amidst the bloated running times of the usual winter blockbusters and Oscar-contenders!), and open to a rare political thriller more appealing to the eyes than to the brain, then by all means check out Charlie Wilson’s War. If you prefer more challenging political commentary, and more challenges for your hero, I’d almost advise you to look elsewhere... except that then you’d miss out on the most fun screen spy of the year. Yes, Philip Seymour Hoffman’s portrayal of seen-it-all spook Gust is every bit as 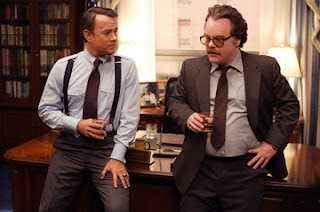 amazing as his mustache and hairdo, and well worth the price of admission on its own, no matter what’s going on around it!

Click here to enter the latest Double O Section contest and win The Wild Wild West on DVD!
Posted by Tanner at 8:18 PM

You are right on the money. A frothy, flawed, if somewhat enjoyable film -- mainly because of Philip Seymour Hoffman -- that is ultimately forgettable.

Saw this one night and then the slow but rivetting Atonement the next night -- no comparison can be made as atonement is superior in alll areas, writing, acting, cinamatography, and it is a film you will think about for several days afterward.

If I saw this, it would be more for Hoffman. I'm not a big fan of Hanks or Roberts. Thanks for the review.

Thanks for the comments, guys. Hoffman is definitely the show-stealer here, as far as I see it. I do like Hanks and Roberts, but not enough so that I'd ever see a movie just for either one of them. Their star appeal is undeniable, though, and it does lend the movie some glamor.

I haven't seen Atonement yet, Bish, but thanks for the recommendation! Guess I should...