Bond Girls Galore!
Both trades have stories on Bond 22 casting today, and each one announces a different Bond Girl! The Hollywood Reporter confirms rumors that have been swirling for the past month about British newcomer Gemma Arterton, who will play an MI-6 agent named "Fields." At 21, she seems a little young to serve Her Majesty's Secret Service (and to pair up with the soon-to-be-40 Daniel Craig), but she's pretty. I've never seen her in anything, though I'm interested in her upcoming St. Trinian's comedy with Rupert Everett. 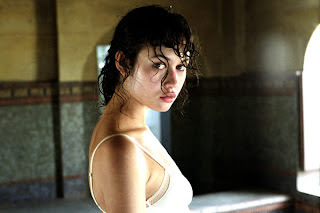 Variety, meanwhile, boasts the out-of-the-blue scoop that 28-year-old Hitman co-star Olga Kurylenko will play "the female lead," Camille. The Ukrainian Kurylenko has caught my eye in both of her most recent roles, as the vampire who seduces Elijah Wood in Paris, Je T'Aime and opposite Timothy Olyphant in Hitman. In my review of that movie, I said, "The obligatory girl, a Russian prostitute (Olga Kurylenko), is easy on the eyes and not a bad actress despite, once again, having virtually nothing to work with, so she fulfills all the demands of a classic Eurospy leading lady." I stand by that, and I hope that Bond 22 offers her more opportunities to show off her acting abilities! (Hitman allowed her to show off other assets.) I like that the producers are continuing to hire exotic European actresses instead of Hollywood leading ladies like Halle Berry or Teri Hatcher. It feels more in keeping with Sixties Bond. I also like the idea of a "Eurospy Girl" (essentially) becoming a Bond Girl, even if it's four decades late!

Both articles list off the rest of the cast, as has been widely reported elsewhere in recent weeks. Mathieu Amalric, who's drawing rave reviews for his current performance in The Diving Bell and the Butterfly, and who stood out in Steven Spielberg's Munich (opposite Daniel Craig) plays villain Dominic Greene. (With addition Jesper Christiensen reprising his Casino Royale role as "Mr. White," does this mean that all the villains in this mysterious organization take Clue-like color surnames?) Giancarlo Giannini returns as Mathis, as does Judi Dench as M and Jeffrey Wright as Felix Leiter. This makes Wright the second actor ever to play Felix twice in the franchise's 46-year history; only David Hedison held that honor previously.
For more information on the whole cast, check out the official press release at CommanderBond.Net.
Bond On The Xbox
No, it's not a new game... The Hollywood Reporter reports that Microsoft has inked a deal with MGM to make the Bond films (and others from the MGM library) available for download and viewing on Xbox Live. The article states that some films in the MGM deal will be made available in high-def, but doesn't clarify whether or not that includes 007.

Click here to enter the latest Double O Section contest and win The Wild Wild West on DVD!
Posted by Tanner at 1:10 PM

I'm happy with the female castings for Bond 22. Both of them are beautiful. It will be interesting to see their characters and how they pair up with 007. I am glad that they are continuing to cast European actresses. I got so sick of all the American Hollywood actresses during the Brosnan years, such as Teri Hatcher, Denise Richards, and Halle Berry.

I do worry that Gemma might seem too young, and I haven't seen her act at all, but hopefully she'll surprise me. Overall, I'm much happier with casting relatively unknown European actresses to that awful practice you mention of saddling poor Pierce with Hollywood stars of varying legitimacy.