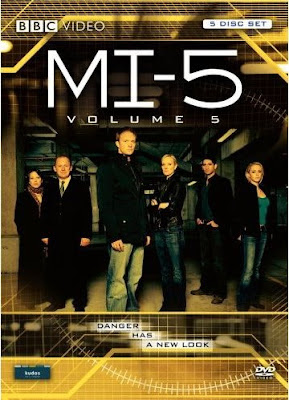 New Spy DVDs Out This Week
There aren't many spy discs out this week, but the main one's a biggie. BBC’s MI-5: Volume 5 comes out today, with Rupert Penry-Jones returning as agent Adam Carter leading a team that will be mostly familiar to those who’ve watched religiously through Season 4, but completely alien to someone who last tuned in during, say, Season 2. That’s right, the mortality rate on this show remains exceptionally high, which keeps it fresh in its fifth "series" (as they say in England, where they also refer to this show by the better title "Spooks"). It’s taut, suspenseful, quality television, where anything can happen and even the main character is never safe. As of Season 4, MI-5 had lost a bit of the more realistic edge that separated it from 24, but was still a long way from devolving into the soap opera of that program. As usual, the last season ended with a cliffhanger, and I’m very much looking forward to seeing what happens next...
Click here to enter the latest Double O Section contest and win The Wild Wild West on DVD!
Posted by Tanner at 11:55 PM

I loved the early seasons of MI-5. I had been watching it on A&E. Then it's like with the fourth season they didn't half show it or something. I never saw it or the 5th one. I hated that because I really only saw Adam as a new cast member, when he came on in the 3rd season.

The American broadcast rights switched to BBC America with the 4th Season. I think they still air it. The problem with both A&E and BBC America, though, is that they cut the hour-long episodes down to 45 or 50 minutes to show commercials. The plotlines are so tight already, that I can't see them making any sense in truncated versions! I began watching the show on A&E and didn't get into it, then tried again on DVD and loved it. I think that was because of seeing them uncut. So I would recommend Netflicking the whole thing from the start to see it uncut...