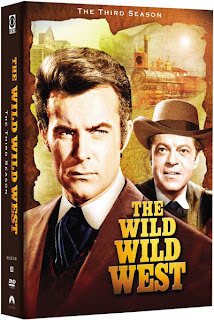 Win a copy of the the latest DVD season of this classic Sixties spy/western hybrid starring Robert Conrad and Ross Martin! I've often called The Wild Wild West the closest show to The Avengers Hollywood ever produced. So if you're a fan of that series' eccentric diabolical masterminds and general quirkiness, here's your chance to sample the quintessential American equivalent. Entering is easy. Simply answer the following trivia question and send an email with the subject heading "WILD WILD WEST" including your name, mailing address and the correct answer to the Double O Section by midnight, Pacific Time on Tuesday, January 15, 2008. Here's the question:

What was the name of Dr. Loveless' lovely female companion in the show's first two seasons? (I'm talking about the character, not the actress, and the answer should be fairly easy to find right here on the Double O Section...)

One entry per person, please. Double entries will be disqualified. One winner with the correct answer will be drawn at random and announced in one week’s time on January 16, 2008. Winners’ names will be posted here and they will be notified via email. All entries will be deleted immediately after the contest’s close, and no personal information will be retained or transmitted to any third parties. The contest is open to anyone, but please be advised that these are Region 1 NTSC DVDs. They should play fine in any North American player, but may require special region-free players in other parts of the world. Unfortunately, the Double O Section cannot assume responsibility for items lost or damaged in transit.
Posted by Tanner at 1:03 PM