New Bond Girl Olga Kurylenko In Hitman
Fox has just announced Hitman for release March 11 on DVD and Blu-Ray. Their press release touts its newest, best selling point: "The Stylish, Edgy Action Film Starring Timothy Olyphant And The Newest Bond Girl Olga Kurylenko!" (I'm taking advantage of that fact myself as an opportunity to run this photo...) Hitman will be available in rated and unrated editions (the latter running a minute longer), as single or double discs. Both versions include deleted scenes and an alternate ending; the cumbersomely titled "Hitman Digital Copy Unrated Special Edition" comes with all that plus the featurettes "In the Crosshairs," "Digital Hits," "Settling the Score" and "Instruments of Destruction" (focusing on each of Agent 47's various guns), as well as a gag reel and the titular digital copy. (This one, unlike the ripoff "digital copy" on Live Free or Die Hard, is compatible with iPods.) Oh, and Olga Kurylenko. Both versions come with Olga Kurylenko. Retail for the single disc will be a steep $29.98; the double disc an even steeper $34.98. Read my review of Hitman here.
Mission: Impossible: The Fourth TV Season
TVShowsOnDVD.com reports a May 13 release date for the next season of Mission Impossible. The show underwent a lot of cast changes in Season 4, with Martin Landau and Barbara Bain exiting and Leonard Nimoy joining as Paris (duly reflected on the rather unimaginative box art). There was no immediate permanent replacement for Bain. The 1969-70 season contained twenty-six episodes.
More Inspector Clouseau 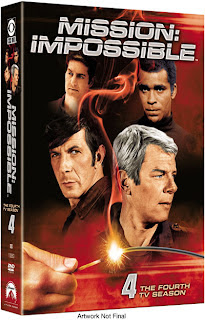 No, there are no more Pink Panther movies left to be released on DVD (well, not until Steve Martin takes his second crack at it), but having exhausted all of those (even the Alan Arkin and Roger Moore entries), MGM Home Entertainment will finally (after many delays) release The Pink Panther & Friends Classic Cartoon Collection Volume Six: The Inspector, collecting classic cartoon shorts featuring the character. Included are such Sixties and Seventies favorites as "The Great DeGaulle Stone Operation," "Napoleon Blown-Aparte" and "Ape Suzette."
Posted by Tanner at 8:17 PM

I never saw Hitman at the movies, so I'll be getting it from Netflix. I do want to see more of the newest Bond girl.