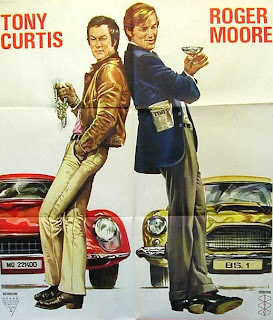 Stiller Persuades Clooney and Grant?
This one's ollllllld news, but somehow I missed it last May, so I better play catch-up! Last I heard, Ben Stiller was developing a movie remake of the classic Tony Curtis/Roger Moore television series The Persuaders (my second-favorite British spy series, after The Avengers) to star himself and Steve Coogan as playboy adventurers Danny Wilde and Lord Brett Sinclair. But apparently news emerged from last year's Cannes Film Festival that George Clooney and Hugh Grant are in talks to take over the roles, with Stiller still on board to produce. I still believe that the Stiller/Coogan pairing could have worked (and it would have been cool to see Coogan realize his ongoing Roger Moore fixation by stepping into his shoes), but there was certainly a lot more potential for that version to go horribly awry, too, and turn into Starsky and Hutch 2. To me, Clooney and Grant leave a lot less room for error. (My dream cast for such a remake has always been Grant and Bruce Campbell.) Clooney is actually perfect for Danny Wilde, and an Ocean's 11 tone is just the right thing for The Persuaders, which despite its share of more dramatic episodes, was always first and foremost about fun. It would be great to see this version happen, become a hit, and spawn a whole series of glamorous spy action on the French Riviera! (And I can't wait to see a red Ferrari 599 GTB square off against a gold Aston Martin DBS to a pulsing remix of John Barry's sublime theme music.) Of course, it all really depends on what kind of chemistry Clooney and Grant have together...
More Jack Ryan On The Horizon?
Moviehole runs the rumor today that Paramount is reviving its Jack Ryan spy franchise with Ryan Gosling as the fourth actor to step into the role of Tom Clancy's action-prone CIA analyst(following Alec Baldwin, Harrison Ford and Ben Affleck) . The new movie, they claim, won't be based on a Clancy novel at all, but will be an original Jack Ryan film adventure titled By Any Means Necessary. This is a little bit surprising as, unlike the Bond series (whose producers have-with the obvious exception of Casino Royale-been creating original plotlines since Licence To Kill, having basically exhausted the Ian Fleming source material), there are still unfilmed Jack Ryan novels. Some of those are unsuitable for a younger actor (taking place after Ryan implausibly became President), but Clancy wrote Red Rabbit, about a younger Ryan, specifically with the goal of continuing the Ben Affleck-led series reboot. Oh well. This Gosling rumor comes on the heels of far more tantalizing rumors about either Alec Baldwin or Harrison Ford returning to the role.
Defiance Trailer
The first trailer is out now for Daniel Craig's next star vehicle, the Ed Zwick-directed Defiance. Frankly, I'm underwhelmed. Hopefully it's not too indicative of the actual film...
New Transporter Director
Not quite spy news, but as I've made the case before, essentially so: Dark Horizons reports that a director has been selected to helm the Jason Statham sequel Transporter 3. Olivier Megaton, director of the 2002 Asia Argento thriller The Red Siren will take the reins. I hope he manages to capture the same ideal "Roger Moore Bond movie" feel that Louis Leterrier found for Transporter 2. There aren't enough action movies in that tone these days, and while I wouldn't advocate Bond himself heading back in that direction, I like the idea of someone else doing it. And Statham's perfect for it. I haven't seen The Red Siren (though it sounds pretty cool), but I have seen Hitman, for which Megaton directed second unit. And I wasn't impressed by the second unit stuff. I didn't find any of the action scenes particularly memorable. So I really hope that Transporter [1] co-director Cory Yuen returns to his Transporter 2 positi 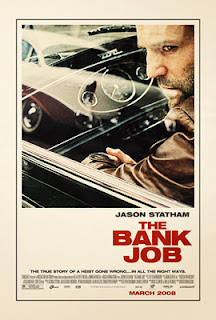 on of "action choreographer" to ensure that doesn't happen here! On the plus side, maybe Megaton will bring along Argento to co-star. She'd fit right into the Transporter world!
Shooting on Transporter 3 is expected to begin this summer. If you need a Jason Statham fix in the meantime, be sure to check out the awesome trailer for The Bank Job. Again, not a spy movie (why doesn't he do a straight-out spy movie?), but something that looks like it will appeal to fans of The Italian Job and other great Sixties and Seventies heist flicks!
Posted by Tanner at 1:22 PM

Thanks as usual for the great updates. The Tranasporter is a great action flick, so I looking forward to The Bank Job, but Trans 3? Trans 2 did not live up to the initial film, so they'll really have to step it up this time.

One of the stellar things about the original Transporter was that the fifty against one fight scenes were choreographed in such a way to make them more plausable than normal action films.

you can pick up a great download of the music to The Pursuaders over at: www.thecrimelounge.blogspot.com/
along with many other spy themes.