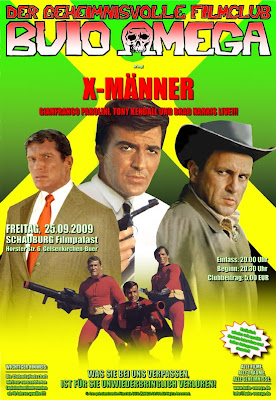 A reader on the Eurospy Forum has shared the news that a German film society called The Mysterious Film Club Buio Omega will run a double-bill of Kommissar X films (or possibly, judging from the poster, the spy/costumed adventurer hybrid with the same leading men, Three Fantastic Supermen) at a cinema in Gelsenkirchen next month. According to their website, "The Mysterious Film Club Buio Omega presents three legends of the European cinema live on stage on 9/25/2009. Kommissar X himself Tony Kendall and legendary director Gianfranco Parolini (alias Franc Kramer) will thrill us with their visit. And since he had so much fun the first time, bear-strong Brad Harris will return to our stage in order to make the unbelievable Kommissar X-reunion perfect!" If you're lucky enough to be in Germany next month, head on over to the club's website for more details. Even if you're not, check out the site. This looks like a very cool film society focusing exclusively on European exploitation films of the Sixties, Seventies and Eighties and screening in a golden age movie palace. If you don't speak German, click on the "Foreign Visitors" page for information in English. Man, oh man do I wish I could be there to attend this historic reunion!
Read my reviews of several Kommissar X films here.
Posted by Tanner at 9:44 PM

Gino Marinuzzi's soundtrack for Operazione Tre Gatti Gialli, better known in the US as "Death is Nibmle, Death is Quick" has been released on a Japanese CD label Columbia (VQCD-10128). If I were to ask for any Kommissar X score, this is the one to be sure. But I hope that this is the first of a series of releases from Kommissar X. A fine tribute to Tony Kendal's recent passing

Wow, that's great news, Mark! Thanks for sharing! I'll post it on the main page. Like you, I hope this leads to a whole series of Kommissar X releases!