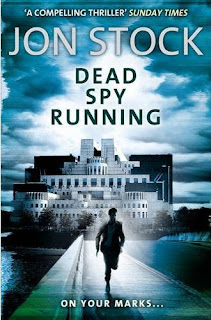 Two spy novels of note (both featuring heroes with daddy issues, strangely) that debuted in hardcover in the UK last summer are now due out in paperback.  Jon Stock's Dead Spy Running had a bland, generic cover in its hardcover edition and now gets a cool, evocotive one for the British paperback; unfortunately Jeremy Duns' Free Agent suffers the opposite treatment.  It had a sublime cover graphic in its UK hardcover, and now gets saddled with a generic one for the paperback.  Oh well.  Covers aside, this is a good opportunity for readers who didn't shell out for the hardcovers to pick up these novels at a more affordable price.  Both books mark the beginning of planned trilogies, and Dead Spy Running has already been optioned for a film (before it was even published, in fact).  Stock's novel was supposed to come out in America as well as Britain last summer, but for some reason it was delayed, and Yanks will finally get it in hardcover this September. 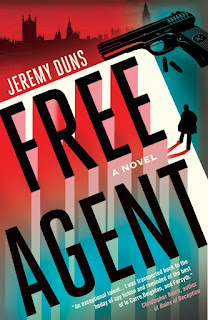 Free Agent, meanwhile, is due out in paperback in the US in June

, but the hardcover is still available, too, and can currently be ordered from Amazon for a bargain price.  The US paperback, I'm happy to report, boasts terrific artwork, again in stark contrast to the bland US hardcover!  Neither of these books gets good hardcover and paperback artwork in any one territory, but luckily both get at least one good cover in each format.  Odd!  I haven't read Stock's book yet (although I'm looking forward to reading it eventually), but Duns' is indeed a great read, and comes highly recommended.  I'll post a full review around the time the American paperback comes out.
Posted by Tanner at 1:41 PM

Email ThisBlogThis!Share to TwitterShare to FacebookShare to Pinterest
Labels: Books

Actually, I got the American hardcover of Dead Spy Running via Amazon a month ago. An excellent read and well worth tracking down -- as, of course, is Jeremy Dunn's . . .

Really? It's not a British import? If so, it was a really weird release. It seemed to be generating a lot of hype before coming out, and then the listing disappeared on Amazon for a while and no bookstores seemed to carry it. Eventually an odd listing turned up on Amazon that seemed to me to be a British import (with the UK cover), and now there's a much more legitimate listing for a hardcover release in the fall. I wonder what's going on? Whatever the case, I hope the next release does happen, and gets a bigger push!