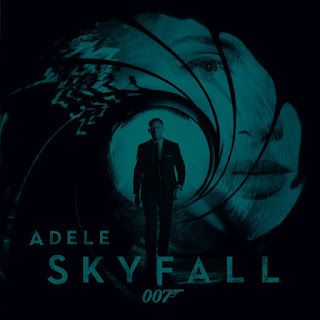 Today the worst kept secret of the past year was finally officially confirmed: Adele will perform the theme song for the latest James Bond movie, Skyfall. Adele first hinted as much nearly a year ago and it's been persistantly rumored ever since, but for some reason EON has waited longer than ever to make the official announcement. The song will officially debut on Friday, October 5 (Global James Bond Day, and the day of the Bond music event at the Academy of Motion Picture Arts and Sciences in Los Angeles), at 0:07 BST on Adele's website. (That's 7:07pm, October 4, Eastern Time in America.) But, inevitably, clips have already leaked out. I imagine links will disappear quickly, but keep popping up until Friday's unveiling. Adele is possibly the biggest recording artist in the world right now (her last album, 21, was the bestselling album of the last two years), so this song seems to have a good chance of making the biggest Bondian impact on the charts since Madonna's "Die Another Day" in 2002. There's no word yet on whether there will be a physical CD single (fingers crossed, because I'd hate to curtail my collection of Bond singles!), but the digital download can already be pre-ordered on iTunes.
Posted by Tanner at 12:39 PM

Over on Rope of Silicon, you can here 90 seconds of the song. It sounds Bond and it sounds wonderful!