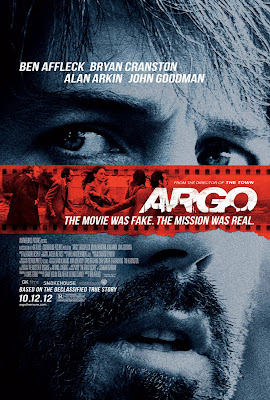 In Argo, director Ben Affleck successfully blends history and pop culture nostalgia to create one of the best spy films of the year, deftly jumping from genre to genre and combining laugh-out-loud humor and nail-biting suspense in ways that shouldn’t work... but undeniably do. Based on a chapter from the memoirs of real-life CIA exfiltration specialist Tony Mendez and a WIRED Magazine article about the recently declassified mission, Argo tells the story of a real CIA rescue mission that has all the hallmarks of a Jim Phelps operation from the Mission: Impossible TVshow. It’s impossible not to think of that show, in fact (which is among the highest compliments I can pay to a modern spy movie), watching the events of Argo unfold.  When Mendez (played by Affleck) suggests disguising American hostages (or would-be hostages) as a Canadian film crew scouting locations for a Star Wars-inspired sci-fi movie to extract them from hostile Iran, it sounds just like the zany capers Phelps would dream up on the show. And, just like Phelps in the early days, Mendez goes on to select a team of non-spy professionals in their given Hollywood fields to pull it off. Just like Phelps in the later days, he and everyone else wear gaudy Seventies fashions while doing it! (Mendez’s boss even gives him a version of the standard “disavowed” warning from Mission: Impossible, instructing him that should he be captured, the Agency “won’t claim” him.) 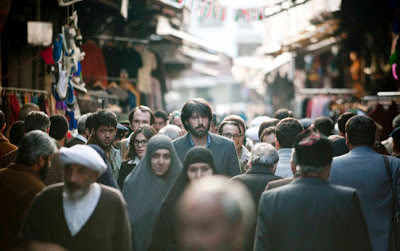 Adding a dash of documentary to its multi-genre quiver, Argo begins with a succinct history lesson detailing America’s sordid history with Iran, including the CIA’s installation of the puppet Shah who safeguarded U.S. oil interests while allowing his people to be tortured. But just because we understand their anger with America doesn’t make it any less harrowing when the film then puts us inside the American embassy in Tehran during the early days of the Islamic Revolution as a frenzied protest turns into an assault on U.S. sovereignty. Diplomats hasten to incinerate or shred as many files as they can as furious Iranian students overrun the building, seizing hostages. During this powerful opening scene, Affleck demonstrates an impressive Paul Greengrass-like ability to thrust his audience into the center of the action (and not just by quick-cutting and shaking the camera around chaotically, either). You really feel these Americans’ terror as the hostage-takers pour in. 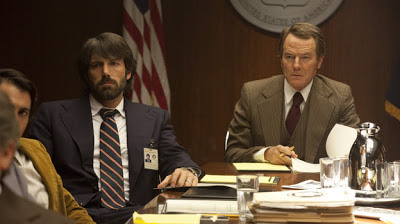 Six terrified Americans, however, manage to escape onto the streets of Tehran amidst the chaos. With nowhere else to go, they end up finding refuge at the personal residence of the courageous Canadian Ambassador Ken Taylor (wonderfully played by Alias’ Victor Garber). And there they remain… for two and a half months. That’s when the State Department decides to put together an exfiltration plan, initially inviting Mendez and his Agency boss Jack O'Donnell (Brian Cranston) purely as a matter of protocol. Mendez can’t help pick apart their faulty plans, however (State wanted them to bicycle across the border in the middle of winter), and soon finds himself with the responsibility to come up with a better one. Inspiration strikes when his son directs him to a Planet of the Apes movie on TV. There are no more foreign teachers or aid workers left in Iran to convincingly disguise the Americans as… but everyone knows that Hollywood movie studios will “shoot in Stalingrad, with Pol Pot directing, if it will sell tickets,” as Mendez puts it. And Iran has desert and Arabian Nights-like locations that would lend themselves to one of the budget sci-fi epics that preponderated in the wake of Star Wars. As O'Donnell tells the State Department, “it’s the best bad idea we’ve got.” 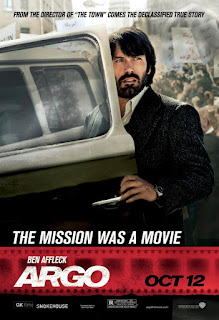 Mendez is authorized to set up a fake film production, for which he recruits a pair of Hollywood insiders. One is legendary make-up artist John Chambers (the man responsible for much of that Apes make-up), who’s worked with the CIA before by creating disguise kits, and the other is once big-time producer Lester Siegel, who insists that if he’s going to produce a fake movie, it’s going to be a fake hit. Both characters are played excellently, by John Goodman and a sure-to-be-Oscar-nominated Alan Arkin, respectively. While Chambers’ real name made it into Mendez’s book and the movie, the Siegel character is a composite of several unnamed people. As Mendez pretends to be bigshot in Hollywood (“you’ll fit right in,” Chambers assures him), Siegel takes out trade ads and drums up publicity for their fake sci-fi epic, Argo, by hosting a staged reading of the script, complete with actors in cheesy sci-fi costumes. 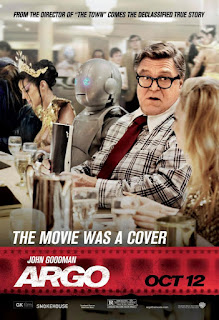 The whole Hollywood section has a very Ocean’s 11 vibe to it, and plays out largely for laughs, yet Affleck manages to segue seamlessly from that into the visceral suspense of the actual mission as Mendez slips into Tehran on a fake passport (by way of a brief meeting with British Intelligence in Istanbul to collect his visa). Certain visas are needed for entering and exiting the country, and various permits are required for a film crew from the Ministry of Culture, all of which leads to some suspenseful and well-executed spycraft of the sort we’re used to from fact and fiction alike. There’s dissent among the party of Americans Mendez is there to rescue, as well, and it’s deftly handled by the skilled actors. (Standouts include Tate Donovan, Kerry Bishé  and Scott McNairy.) Especially following a harrowing trip into the heart of the city to sell the cover (they’re accompanied by a representative from the Ministry of Culture, but still subjected to a torrent of anti-American demonstrations even as they pretend to be Canadian), some of them are none too eager to accept Mendez’s out-there plan. But there’s a ticking clock. They won’t be able to stay in the ambassador’s house much longer… and then what? If they're discovered, the fear is they'll be publicly executed. Even though audiences likely know the outcome going in, Affleck still manages to generate some blistering suspense during the film’s final act. (Though he and writer Chris Terrio resort to creative license to heighten what actually happened.) 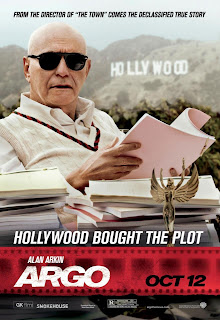 Not only do costume designer Jacqueline West and production designer Sharon Seymour do a fantastic job of recreating exceptional period detail in Washington, Hollywood and Tehran, but Affleck reinforces the era by shooting in a style and aesthetic instantly evocative of the late Seventies. The film stock is attractively grainy (he reportedly achieved this effect by cutting his frames in two and then blowing them up), and the studied camera movement recalls paranoid spy and conspiracy thrillers of the era like Scorpio, 3 Days of the Condor, All the President's Men and Peckinpah’s The Killer Elite. Best of all (and setting the appropriate tone from the film’s opening moments), there’s even a period-appropriate retro Warner Bros. logo! (If only GK Films had followed suit and created a fake one from that time even though they didn’t exist then; when their logo comes up after the WB one, it sort of kills the effect.) 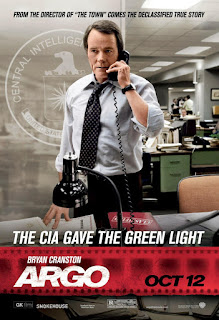 There’s something in Argo to please just about everyone. First and foremost, it’s a killer spy movie with a very Mission: Impossible feel and a very Scorpio look, both of which are likely to appeal to readers of this blog. Beyond that, it richly evokes the period in a way likely to equally interest those who lived through it and those born since. Then there’s also the geek nostalgia factor. Fans of those late Seventies Star Wars rip-offs (among whom I count myself, Starcrash being my favorite) will thrill to the loving Hollywood details, and likely wish that the film had actually been made. (They’re also likely to enjoy the final shot of the movie, which serves as a heartfelt tribute to those films and their fans.) Fortunately, even if it wasn’t made, Argo served a higher purpose well chronicled here, and the implausible-but-true story of its non-making, now also called Argo, is an instant classic of multiple genres.
Posted by Tanner at 1:13 AM

So far this year, this is my favorite film of the year. Hope it gets a 'Best Picture' nod at the Academy Awards and also a director nom. Affleck just seems to get better at his craft with each film he directs.