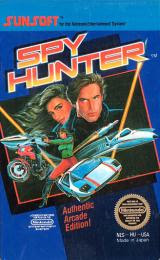 This is another one of those projects that's been floating around in perpetual development at various studios for as long as I've been writing this blog. (Longer, in fact.) But studios remain determined to make a movie out of the popular 80s arcade game Spy Hunter, a vertical scroller in which a secret agent in a gadget-laden supercar, um, hunted spies (I guess) by blowing up lots of other vehicles (that was the important part). As I said last time I wrote about this project, back in 2010, Spy Hunter combines two of my very favorite things: spies and their cars. At that time I was blogging about a potential Chad St. John-scripted version at Warner Bros. Prior to that incarnation, the property had been churning at Universal for a number of years with The Rock attached to star, and first John Woo and later Paul W.S. Anderson attached to direct. Now Vulture reports (via Dark Horizons) that Warner is still keen to make this movie happen, but St. John appears no longer involved. Instead, the studio has tapped Zombieland and Gangster Squad helmer Ruben Fleischer to direct and executive produce. Apparently he's not using St. John's script, but searching for a new writer to flesh out his vision. (Spies and cars? My hand just went up, Warner Bros.!)

While most videogame adaptations immediately spark discussion of what actor could best realize a beloved pixelated hero, in the case of Spy Hunter the question is what car could play the famous Interceptor? I put forth a number of suggestions back in 2010, but of course the vehicular landscape has changed since then. Since the version depicted on the side of the arcade console looked kind of like a cross between a Lamborghini and a Lotus, I think my top choice now would be the brand new Lotus Esprit. It's a cool car, it looks the part, and of course the Esprit has a proud history with spy gadgets.  The 2013 Aston Martin Vanquish would be pretty cool, too, though that marque is obviously pretty closely associated with another spy franchise. (Still, when EON opted not to use the new Vanquish in Skyfall, they might have given up their claim on the car...) Lest I lean too heavily on former Bond vehicles, I'll also suggest the new Jaguar C-X75. Actually, that might be the best option! I still can't believe that amazing concept is actually getting made. It simply cries out for a starring role in a spy movie!
Posted by Tanner at 2:28 PM