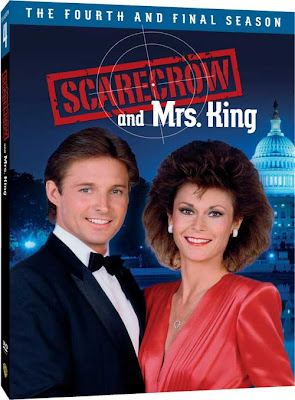 TV Shows On DVD reports that Warner Home Video will release Scarecrow and Mrs. King: The Fourth and Final Season

on DVD on January 22, 2013. That's a few months earlier than expected! (They've been on roughly a yearly schedule so far, and Season 3 came out in March.) It also means that fans will have a complete set of the only bona fide American spy TV hit of the 1980s on DVD. Since it was among the last successful shows of its era to appear on the format, I was perpetually concerned that Warner wouldn't finish on the same format the started on, and might relegate later seasons to MOD, which would have inevitably made them costlier. But now the fourth and final season is slated for official release, of the sort you can actually buy in brick-and-mortar stores! (As well as on Amazon, of course.) Mission: Impossible fans, too, should take note, as this season contains a great Barbara Bain appearance, in which the actress plays a full-fledged spy! (She even gets an exciting escape across the Soviet border.) The 5-disc set will contain all 22 episodes of the show's last season and retail for $39.98, though it can already be pre-ordered on Amazon for substantially less.

Read my review of Scarecrow and Mrs. King: The Complete First Season here.
Posted by Tanner at 12:54 AM