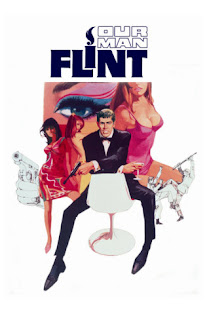 Specialty label Twilight Time, who release 20th Century Fox catalog titles in limited editions of 3,000 (and began their run with a spy release, The Kremlin Letter), unveiled their first titles of 2013 on their Facebook page yesterday... and among them are two eagerly awaited Blu-ray spy titles! Our Man Flint (1966) makes its high-definition debut on January 15, and its 1967 sequel In Like Flint follows a month later on February 12. Both star the inimitable James Coburn as the flawless superspy Derek Flint. No details are available yet, but Twilight Time Blu-rays tend to retail for $34.95 and the most common extra is an isolated score track. (Jerry Goldsmith composed the wonderful Flint music.) I happen to know for a fact that there was a documentary about the Flint films produced several years ago for a cancelled Fox Blu-ray release. I really, really hope that turns up on one of these Twilight Time discs! Twilight Time titles are sold exclusively by Screen Archives Entertainment.
Posted by Tanner at 1:45 PM

Now THAT has to be a must purchase!!!

Our Man Flint is a great spy romp. I'm not sure I'll bother upgrading to the Blu-Ray edition but it's nice to see some cult stuff appearing in that medium.