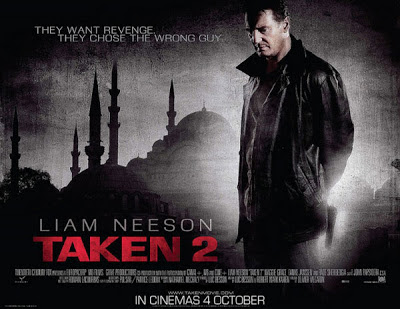 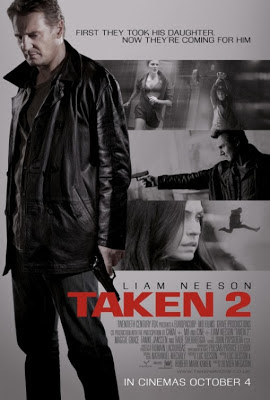 Almost four years after the original Luc Besson-produced, Liam Neeson-starring neo-Eurospy flick Taken (review here) became a surprise hit, a sequel finally arrives. And it delivers pretty much exactly what a Taken sequel needs to deliver. Think of Taken 2 as the Die Hard 2 of the Taken franchise: it adheres to the same basic formula of the original with the slightly diminishing returns inherent in reheating a premise… but does so in such a way as to leave fans of the original satisfied that they have, indeed, just seen another Taken movie. Gone, sadly, is the element of surprise that worked so well for the first film, when anything seemed possible around any corner. (I’ve never seen an audience uniformly gasp and jump in their seats the way they did when Neeson’s character suddenly shot someone in the arm unexpectedly.) That’s not really possible the second time around. So what we’re left with instead is the other thing that drove the original: Liam Neeson being a badass in a foreign city. And when the city is as photogenic as Istanbul is, that’s enough for me. 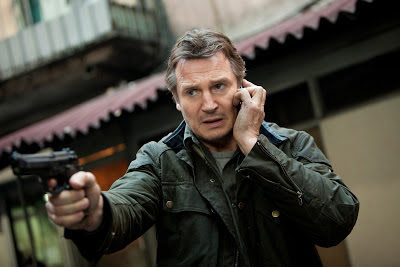 This is, of course, the first of two major spy movies taking advantage of Istanbul’s scenic minarets this fall. (Three if you count a brief scene in Argo.) We will see those same inviting rooftops play host once more to an exciting chase sequence in Skyfall, as we’ve seen them do countless times before, and it never gets old for me. Istanbul is one of my very favorite spy locations, lovingly photographed in genre entries as diverse as Bond movies From Russia With Love and The World Is Not Enough, Eurospy titles like Fury on the Bosphorous and From Istanbul, Orders to Kill, actual Turkish spy films like Golden Boy, and neo-Eurospy entries like The International. I’m happy to report that the ancient city uniquely bridging East and West is well-utilized in Taken 2 (though sadly Neeson never threatens to “tear down the Topkapi Palace” if he has to).

The movie’s plot is a direct continuation of the first film… though not so direct that you couldn’t pick it up easily enough not having seen that one. After former CIA agent Bryan Mills (Neeson) used his “unique skill set” to save his daughter Kim (Maggie Grace) from Albanian sex traffickers in Paris, Kim has returned to her home in Beverly Hills and tried to get on with her life. Thus we begin, per formula, with the same sort of cheesy domestic scenes that began the first movie, but they’re far less excruciating this time—even enjoyable. That can mainly be credited to Grace. If there were a Golden Globe for “Most Improved,” Maggie Grace would surely win it hands-down! No doubt slightly embarrassed being a 29-year-old playing a 16-year-old, in the first film she overcompensated by playing Kim like she was 8. Not this time. Now (perhaps thanks to her experience playing a full-grown heroine in another Besson-produced neo-Eurospy flick, Lockout), Kim is a functioning adult. (Well, teenager. She still hasn’t passed her driving test.) Bryan, meanwhile, is making some inroads with his ex-wife, Lenore (Famke Janssen, looking every bit as stunning as she did in GoldenEye 17 years ago), after her rich-guy husband (24’s Xander Berkeley, not present in the sequel) left her. Bryan proposes that his ex and daughter meet him in Istanbul for a vacation when he’s finished up a 4-day private security job. And that, of course, proves to be a bad idea. (The Taken movies might be the first anti-tourist spy movies, insinuating that whenever Americans travel abroad, they inevitably get targeted by sex traffickers and their families! I actually know some women forever put off Parisian vacations by the first film.) Istanbul is too close for comfort, it turns out, to Albania, where a little village mourns the loss of many sons (all awful, evil criminals—but no matter) slain by Mills in the first film. Chief pallbearer is grieving father Rade Sherbedgia (The Saint, 24, M:I-2), and whenever he shows up there’s bound to be trouble. Sherbedgia’s character, Murad Krasniqi, leads a small army, like pigs to slaughter, on a road trip down to Turkey to have their revenge on Mills and his family.

Luckily, when Bryan and Lenore are, ahem, taken (after a rousing pursuit through the city’s old world streets and bazaars), Kim is back at the hotel hanging out by the pool. This enables Bryan, through some ingenuity learned in the CIA, to secretly contact her and instruct her on how to find the location where her parents are being held. His circuitous plan involves Kim throwing hand grenades all over Istanbul (don’t ask), but it’s suitably filmic and fun to watch—and it works! The film’s best scenes involve Mills and his daughter teaming up to save Lenore. Whether Bryan is talking Kim through a rooftop foot chase over a cell phone or shouting driving instructions at her during a high-speed car chase through the labyrinthine streets of Istanbul, the high-octane father/daughter bonding adds a welcome new dimension to the Taken formula. 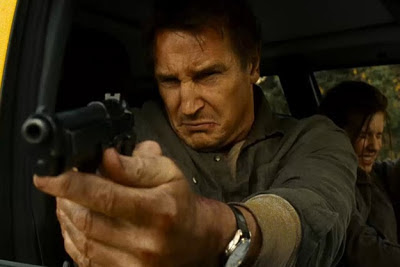 The biggest disappointment compared to the first film comes from the action sequences. While I’ve enjoyed a number of Olivier Megaton’s films, he doesn’t have Pierre Morel’s gift for directing fights and chases in a lightning-paced manner that still enables viewers to always know exactly what’s going on. Instead (here more than in Colombiana or Transporter 3, unfortunately), Megaton and his editors fall back on that oh-so-popular zeitgeist crutch of cutting the fights up so rapidly so as to render them incomprehensible—seemingly in an attempt to disguise the fact that they weren’t shot very dynamically to begin with. Megaton’s perfectly adept with car chases and firefights, but resorts to that stroby fast-cutting to cover up the shortcomings in Taken 2’s mano-a-many-mano fight scenes. That’s a shame, because audiences want to see Liam Neeson being the badass we know him to be from the first film unencumbered by such gaudy distractions. 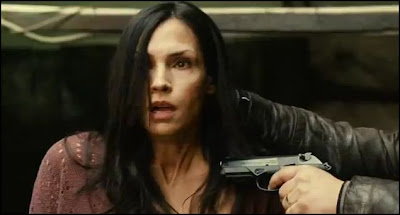 The directing doesn’t live up to the first film, but the surprisingly solid script makes the most of delivering a new storyline within the confines of the established series formula. The exotic setting is top-notch, Neeson is as good as ever, Grace is dramatically better than before, and there’s more Famke Janssen, which is always a good thing. The sequel also benefits from a more clearly defined villain to root against, and milks some considerable humor from the previously grating domestic scenes. (There’s almost as much anticipation in seeing how the world’s most overprotective dad will react to his daughter’s new boyfriend as how he will save his ex-wife from being slowly bled to death while suspended upside-down!) All-in-all, Taken 2 is a sequel that delivers the expected goods, and should appeal to fans of the original and fans of the neo-Eurospy genre at large.
Posted by Tanner at 2:02 PM

The problem with Taken 2 is that it's relatively bloodless for the amount of people being shot to pieces, it lacks any kind of real originality or tension and is sorely missing the inventiveness of the first Taken movie.