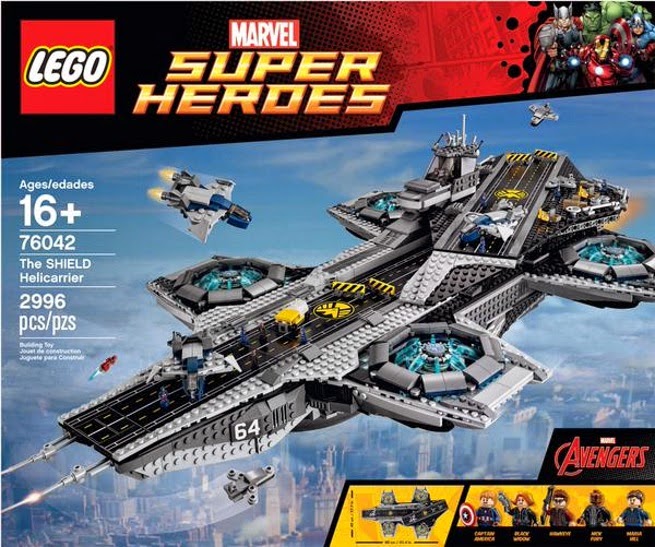 ComicBook.com reports (via Blastr) that Lego will release a nearly 3,000-piece set to construct the famous S.H.I.E.L.D. helicarrier. This has to be one of the coolest spy toys in a long time! Of course the toy is meant to tie in with Marvel's Avengers: Age of Ultron movie, not with the classic Sixties Jim Steranko or Jack Kirby Nick Fury: Agent of S.H.I.E.L.D. comics from which it originates, but it's cool either way! Nick Fury: Agent of S.H.I.E.L.D. was Marvel's way of cashing in on the Bond-based Sixties spy boom, and S.H.I.E.L.D. was essentially their version of U.N.C.L.E. But because Marvel was making comic books, not movies or television (and largely because the creative genius Steranko was drawing them), they ventured further into the realm of the fantastic than even Ken Adam could realize on screen. Aston Martins with ejector seats didn't go far enough; Nick Fury drove an invisible Porsche capable of flight. And a building with a secret entrance through a tailor shop would hardly do as S.H.I.E.L.D.'s HQ (although they did have one of those, too); Fury needed a flying aircraft carrier from which to direct his intelligence operations! The helicarrier is perhaps the ultimate symbol of Marvel's unique take on spy-fi, which blended espionage with superheroics and science fiction. And though it's remained a mainstay of the Marvel Universe in comics ever since, it seemed so outlandish that I never dreamed we'd see a big screen version. But Joss Whedon proved me gloriously wrong in Marvel's The Avengers (2012), realizing the improbably airborne spy headquarters with as much realism as possible. So much so that with that set-up, audiences had no problem with a whole fleet of helicarriers in Captain America: The Winter Soldier (2014)! And now, at last, we've got ourselves a Lego helicarrier. Oh, how I want one! But the price is likely to be prohibitively steep, and the size would pose a display problem. But take a look at this video to see how detailed and all around awesome it is, and you'll probably want one too! Owing to its enormity, the helicarrier isn't in scale with standard Lego figures, so Lego have created a cast of even smaller figures to assemble on its deck. Among, naturally, are superspies Nick Fury (in his Samuel L. Jackson incarnation) and Black Widow (based on Scarlett Johansson).

Read more about the helicarrier in my S.H.I.E.L.D. primer, here.
Posted by Tanner at 9:45 AM

ComicBook.com reports (via Blastr) that Lego will release a nearly ... hlegoavengers.blogspot.com

Thank you for your interesting and informative blog. I have enjoyed reading it and appreciate the work you have put into it. Here is some relevant information for you to review .
Toy Aircraft Carrier