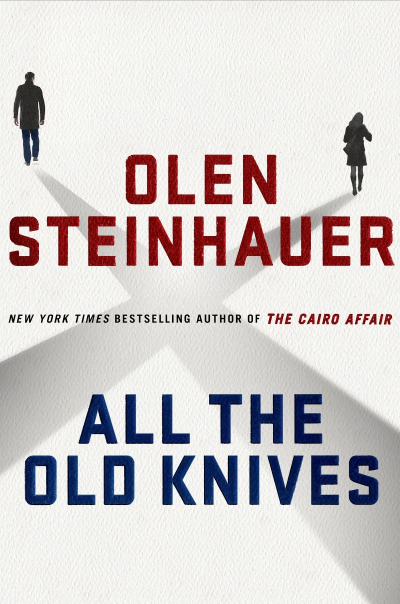 Deadline first reported last October that Divergent director Neil Burger would helm an adaptation of Olen Steinhaur's new novel All the Old Knives for Chockstone Pictures partners Steve Schwartz and Paula Mae Schwartz and Nick Wechsler, who preemptively optioned the novel a whole year before its publication. Last week the trade updated their story, adding that The Mark Gordon Company and Entertainment One have come on board as financers and distributors, making All the Old Knives the inaugural picture for their new joint studio. This is terrific news. I'm only about three quarters of the way through the book right now, but so far I'd say it could well be Steinhauer's best book to date. (A far slimmer volume than last year's The Cairo Affair, it's simultaneously a denser work.)

The brilliant concept, indicated in the text itself (Steinhaur often tips his hat to his influences in his novels), is Christopher Reid's The Song of Lunch meets Len Deighton's Berlin Game. It's the search for a mole (as in the latter) played out in flashbacks over the course of a dinner between two ex-lovers (as in the former). A man and a woman meet to relive old times and go over an intelligence debacle in Vienna they were both party to six years prior. The novel trades off first person narration between the two of them. Each is apparently suspicious of the other, and both are potentially unreliable narrators. It's a complex spy game formulated by a writer at the top of his craft and played out in a relatable and intensely emotional scenario. It should make a wonderful movie if Steinhauer (who is writing the screenplay himself) can find a way to make the flashbacks and framing structure cinematic. It's the best sort of two-hander, and the complex characterizations should attract top talent in both primary roles. Burger recognizes that, telling the trade, "As a director, I love that it’s a tightly woven puzzle, a mystery involving counter-terrorism and also a mystery of the human heart. Best of all are the two very clever and calculating characters at the center of the story who are dealing with issues of loyalty, sacrifice and a lot of sexual tension. I can’t wait to start casting them.”

Now if only we could get some movement on the long overdue adaptation of Steinhauer's excellent Milo Weaver trilogy.... Last we heard, Doug Liman (The Bourne Identity, Mr. and Mrs. Smith) was attached to direct the first novel, The Tourist, with his Covert Affairs partners Matt Corman and Chris Ord penning the script. But there hasn't been any news since September, 2012. Come on, Hollywood! This is a surefire blockbuster franchise!
Posted by Tanner at 5:30 PM