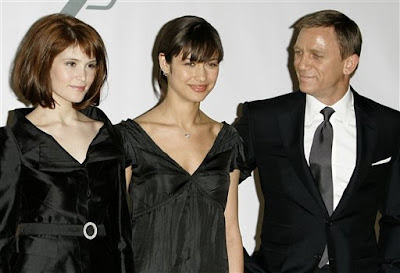 What's In A Title?

As CommanderBond.Net scooped last night (thanks to a vigilant forum member) and EON confirmed at a press conference this morning, the movie formerly known as Bond 22 now has a title: Quantum of Solace. Of all the unused Fleming titles remaining, I can't help but think they picked his second least filmic (second to "007 In New York").

I will say, for the record, that I think Risico is the best unused title. Michael G. Wilson has said that he doesn't like it because it's not a real word. (It's Fleming's version of how an Italian smuggler pronounces the English word "risk.") But since when has being a real word been a prerequisite for being a Bond title? Name the villain "Risico!" (Better name than Dominic Greene...) Name the Macguffin the "Risico Device!" Or use the old chestnut "Operation: Risico." You've got creative writers. I'm sure they could think of something... Oh well. Maybe next time.

For now, we're stuck with Quantum of Solace. Just try belting it out, Chris Cornell-style: "I got a QUANTUM of SOLACE... and, baby, you've put it at zero!" It doesn't work so well, but... OK, I admit it! I was doing exactly that in the shower this morning. Despite the iffiness of the title, it's cool that the producers are showing their commitment to the Bond Reboot commenced in Casino Royale by sticking to Fleming titles. Maybe I can get behind Quantum of Solace yet...

So what, exactly, is a "quantum of solace?" Let's reflect on this passage from the short story of that name, published in the 1960 collection For Your Eyes Only:

The Governor paused and looked reflectively over at Bond. He said: 'You're not married, but I think it's the same with all relationships between a man and a woman. They can survive anything so long as some kind of basic humanity exists between the two people. When all kindness has gone, when one person obviously and sincerely doesn't care if the other is alive or dead, then it's just no good. That particular insult to the ego - worse, to the instinct of self-preservation - can never be forgiven. I've noticed this in hundreds of marriages. I've seen flagrant infidelities patched up, I've seen crimes and even murder forgiven by the other party, let alone bankruptcy and every other form of social crime. Incurable disease, blindness, disaster - all these can be overcome. But never the death of common humanity in one of the partners. I've thought about this and I've invented a rather high-sounding title for this basic factor in human relations. I have called it the Law of the Quantum of Solace.'

Bond said: 'That's a splendid name for it. It's certainly impressive enough. And of course I see what you mean. I should say you're absolutely right. Quantum of Solace - the amount of comfort. Yes, I suppose you could say that all love and friendship is based in the end on that. Human beings are very insecure. When the other person not only makes you feel insecure but actually seems to want to destroy you, it's obviously the end. Quantum of Solace stands at zero. You've got to get away a to save yourself." 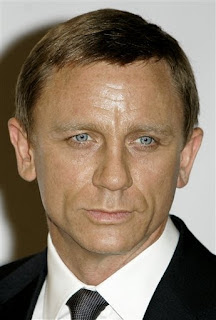 The most promising thing about the use of the title is the tantalizing hope that they might actually use some of the short story itself. It's long been considered unfilmable because all that Bond actually does in it (while on a break from a mission that, embarrassingly, reveals Bond's sympathies for Castro's rebels, then deemed friendly) is go to a stuffy dinner party, have a nightcap, listen to the Governor tell a lengthy anecdote, and walk back to his hotel. Not very exciting stuff. But, the last time I read it (post-Casino Royale), I couldn't help but consider its adaptability. (I also couldn't help but picture Daniel Craig, and I never picture the actors when I read the books. Weird.) What should make it appealing to the filmmakers is that it's a rare story wherein 007 actually undergoes a character change. He learns a lesson. After finding one of his fellow dinner guests a bore, he discovers later that she's actually led quite an interesting life. And he concludes: "I must pay more attention to people. You've taught me a lesson." This seems like a lesson a spy should have learned a long time ago, but let's chalk that up to Bond's chauvinism. He still underestimates women. Thus, that particular lesson would be well-situated immediately following Casino Royale. That change that Bond undergoes, and his subsequent reflection that his own adventures might not be as exciting as the relationships of an ordinary civilian, is what makes Fleming's "Quantum of Solace" a story and not merely a vignette, which it's sometimes been dismissed as. Bond is not just an observer, a listener; he is the character who is changed by the events that transpire in the Governor's story. The change is small, but crucial; it may be the only Bond story whose whole intent is to effect a change in the main character.
So how could "Quantum of Solace" be made into a movie? Well, the Governor's story could be filmed as a period anecdote, omitting Bond altogether. The story on its own is rather reminiscent of Somerset Maugham or Graham Greene. However, that's very unlikely to happen (and certainly not what's happening here!). Alternately, the characters and situations in the anecdote (a promising young diplomat ruined by his insatiable, social-climbing wife) could be integrated into a wider Bond story. It wouldn't be too hard to combine those elements with espionage. And I hope that's what's happening! 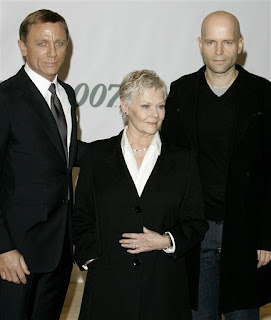 However, it seems unlikely. Michael G. Wilson claimed at today's press conference that the title was chosen only a few days ago. "We thought it was an intriguing title and referenced what happened to Bond and what is happening in the film," he said, summing it up as "a degree of comfort." That not only makes it seem unlikely that the movie will involve the characters from the story, but possibly even that it will contain the title itself. While I'm not advocating shoehorning it in (ala "What a view!" ... "To a kill!"), a title so requiring of explanation should probably be explained. And thanks to the writers' strike, the final draft that Paul Haggis turned in last fall is locked in place, and nothing can be added at this point to make use of the title phrase if it wasn't already there. But maybe it was. Maybe Wilson's playing coy. In the words of Don Black (the one man who probably could convincingly work "Quantum of Solace" into a song), we shall see.
Posted by Tanner at 12:25 AM

s see from my memory there were two other Bond movie that never used the title in song form.

Casion Royale (the new one) never mentioned in the Cornell tune

It's just a title is my response who cares, make with Craig going all bad ass Bond like.

Yeah, there have been several that don't mention the movie. As you say, Octopussy and CR, plus OHMSS... Dr. No if you want to count it... I wouldn't like to see two back-to-back that don't mention the title, but I don't ACTUALLY believe that "Quantum of Solace" is unmentionable. I hope someone DOES try to use it. It might work better in a slower, FYEO kind of number than a You Know My Name rocker.

Arguably the most philosophical, if not the most sentimental of the Bond titles. Most appropriate for Craig’s reprisal role, judging by the amount of treachery and torture he had to endure in the last one. He is slowly but painfully learning his lessons along the way. Good to have you back, 007.

P/S: Solace also sounds quite a bit like Solange, the very first of Bond’s conquest (in Craig’s reboot series) who was untidily bumped off for getting too intimate with our agent. Is there something hinted here?

That's an excellent appraisal of the story, Scaramanga '74. Philosophical, not sentimental. (YOLT gets pretty pholosophical at times too, though.) I certainly agree that the themes inherent in the story are appropriate for Craig's 007!

I doubt there's a Solace/Solange connection simply because the name Solange was taken from an unrelated Fleming story, that aforementioned "007 In New York," but you never know...