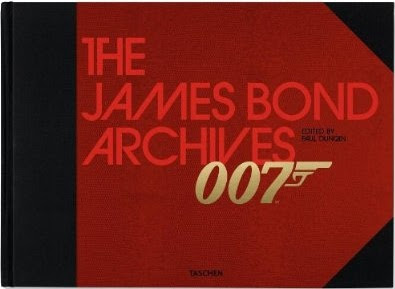 Sure, there's a new Bond movie out today in the USA. Some of you might have heard of it. But there's also a very cool-looking new James Bond book out today, timed to coincide with that little Sam Mendes indie film. It's a massive hardcover book called The James Bond Archives, published by Taschen, a publisher known primarily for art books—and stunning, unique presentations. And true to that reputation, The James Bond Archives is pretty stunning and unique in its presentation. This is not a book you sit in an armchair and read on your lap. This is a book that you lay down on a table in front of you, flip open, and start reading. It's heavy, and it's huge! Not awkwardly so, however... satisfyingly so.

The James Bond Archives isn't just a cool collectible to stick on your coffee table and never refer to, though. It's also a very interesting book. I had wondered what the Taschen book could possibly tell me that I hadn't already read in James Bond: The Legacy or countless other histories of the film series. It does, however, manage to be original, and even to offer new material! Edited by Paul Duncan (who's also the primary contributor), different films are written about by different authors in different styles. This keeps things interesting, and allows for the inclusion of things like a Playboy interview with Sean Connery in its entirety.

The majority, however, is told in oral history format, which is a format I like a lot. It's also a format fairly rare to Bond; out of the many, many books on the subject over the years, the only other one told that way that I can think of is Barnes' and Hearn's Kiss Kiss Bang! Bang! The Unofficial James Bond 007 Film Companion. (There have been some very good magazine articles that approached 007 with oral histories, though.) The approach works well here, and many of the quotes are new to me and very enlightening.

There are also lots of pictures I've never seen before, and after the astounding number of official books on the Bond films, I find that pretty surprising! But there they are. Things like the above imagery of actresses Claudine Auger, Molly Peters and Martine Beswick posing for the Thunderball poster artwork.

On top of that, there's a good selection of storyboards and concept artwork, mixed with behind-the-scenes photos and more familiar production stills. Not just for the official films, either! Even though this book is officially sanctioned by EON, there are also chapters devoted to the rogue productions Casino Royale (1967) and Never Say Never Again! The James Bond Archives carries a price tag as hefty as the book itself, but it's a unique enough publication to warrant that. Even if you're saving this one for your Christmas list, be sure to at least ogle it in your local bookstore in the meantime! I'll try to offer a more in-depth review soon...
Posted by Tanner at 6:34 PM

It sounds terrific, but that price tag puts it out of my reach at the moment.

I already have the books "Bond on Set-Skyfall' and 'The Music of James Bond' on that Christmas list. I don't believe Santa thinks I've been that 'good' to warrant this one.

Tanner if you hear anything about "The Music of James Bond' let us know.

Wow, four times seeing Skyfall. I'm impressed. Probably for me, I'll be seeing it twice and twice is the only way to live. (sorry about that.)

As you wrote, an unusual subject for erotica publisher Taschen. The lowest price I've seen is US $126. from Amazon. It's part book, part art piece collectible. Definitely not a book to read while eating a sandwich.