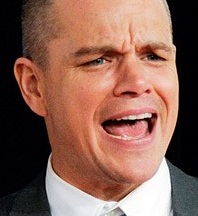 I love Matt Damon in the Bourne movies. But boy is he grumpy! He seems to be emulating Sean Connery's post-Bond attitude about 007, though after just three movies as opposed to Connery's eventual six (in the official line-up), I'm not sure he's earned it. He first got grumpy right after The Bourne Ultimatum, saying on the press tour for that film that "we have ridden that horse as far as we can" and adding that he felt like "a bit of a prostitute" for going as far as he did with Bourne (along with the Ocean's sequels). Later, promoting Invictus, the actor declared that he flat-out wouldn't return to the role without director Paul Greengrass at the helm. (Greengrass had already passed on a fourth film.) He's stuck with that ultimatum, but now taken to badmouthing the direction the franchise has gone in without him while he's at it. (Damon and Greengrass had a very public feud with Tony Gilroy, the screenwriter who contributed to all three Damon films and went on to write and direct this summer's spin-off The Bourne Legacy.) Even though Gilroy was hopeful earlier this summer that Damon would return to the series to face down or team up with Jeremy Renner's Aaron Cross (and went out of his way in interviews to praise and placate Damon), the original Bourne star does not seem eager. Last month he rather dismissively told Movieline that he hasn't seen The Bourne Legacy, but, "from what I understand, it kind of relives [Ultimatum] from a different perspective. What that means, because they use our actors and characters, is that whatever they said [in Legacy] is true and so we'd have to acknowledge it in any Bourne movie that we'd do. And that makes it really tough." According to the website, he then laughed and added,"I don't think we can do the Dallas it-was-all-a-dream scenario. I don't think the audience would go for that after they paid money to see a movie," before finally acknowledging that, "I'd really love to do another one because I love the character."

Of course, if Damon ever gets around to watching Gilroy's film, what he'll learn is that Gilroy bent over backwards not to impact the events of the Damon/Greengrass movies, much to the detriment of Legacy, which ultimately offers zero forward momentum in the series. It would be a shame if the producers went to such lengths to leave the door open for the return of Damon and Greengrass only to have them refuse forever, but as of now that seems to be Damon's stance. He went on to tell the interviewer that it would be "a real struggle" to continue the adventures of his character, since Bourne's motivation in the first three films was to find his identity, which he finally did. "Where do you go next?"

Well, personally, I'd offer him the answer that I always bring up in these stories: go back to the books! There are two and a half whole entire Ludlum plots that the movies haven't touched, since neither Supremacy nor Ultimatum remotely resembled the novels. There are also huge chunks of the first book yet to be explored, including its primary antagonist, the international assassin Carlos the Jackal. While the real-life Carlos was finally captured in the 1990s, it would be easy enough to create a fictional present-day analogue, wouldn't it? I think it would be amazing if the films returned to the much more detailed plot of that first novel, and revealed that there was a whole other layer to Bourne's missing memories than he's yet discovered, and that what he thinks are answers may only lead to more questions. With a little finesse, I think they could pull that off. Ludlum's Supremacy might be easier to tackle, however, since the story more or less stands alone and takes place primarily in the Far East, which is new territory for Damon's mostly Europe-bound Bourne. (It's a slight problem that the films killed off Marie, who plays a major role in that book, but with a little creativity surely the filmmakers could substitute Julia Stiles' character, Nicky?) The primary mover away from the books was Tony Gilroy, who publicly disparaged them. Therefore, it's very easy for me to side with Damon and Greengrass (not that I know the ins and outs of the dispute) over him as curators of the series' future. But Damon really needs to stop being such a grump about it all the time!
Posted by Tanner at 12:17 AM

I'm not Matt Damon's biggest fan, but I think he's probably right about the Bourne films.

Two was ok. Three was pushing it a bit. And they should have stopped it there - ie: no Jeremy Renner follow up!

I always think poorly of 'stars' who dump on the films that have done very well for them (ie made them very rich), and Damon comes into this category.

I mean, we're never likely to see him winning awards for Shakespearian plays or anything, are we?

I agree that there is still the potential to revisit the material from the original Bourne Identity book, with some modern-day equivalent of Carlos the Jackal. However, I think the most fundamental way that the Gilroy movies departed from the Ludlum books was not just in the story content, but also in the underlying themes.

The movies are based around the theme of government as sinister, corrupted, and over-reaching. The CIA higher-ups are the real bad guys in all of the movies. Frankly, I think that the movies have drawn from that well of anti-government paranoia one or two times too many.

In the books, in contrast, the real bad guy is an external threat (Carlos), who has an elaborate network of support. U.S. law enforcement (if I'm remembering correctly) is perhaps a hindrance to Bourne, but is not inherently evil.

My guess is that in the post-9/11, post-Patriot-Act world, the "sinister government" theme really resonated with Gilroy (and maybe Damon and Greengrass).

I am not sure if Gilroy would be interested in making a major shift in the underlying theme in order to do more movies,which unfortunately is what I think would be necessary if the books were ever to get revived for further films.

I agree, T-Bone, that Gilroy seems much more interested in the CIA-as-bad-guys route, which simply doesn't hold as much interest for me personally. With The Bourne Legacy, they had the chance to get away from that, to go a whole different route with a whole different agent and show a Treadstone operative who was actually working for the US government and not trying to escape their kill squads. But instead Gilroy stuck to his tried and true themes, and we were left with a pale retread of what had already come, bolstering Simes' comment that the series may have run its course at three. I'd agree to the extent that the series as GILROY positioned it, about a man being chased by the agency that created him, ran its course there. But I still think the secret to elongating the franchise's cinematic lifespan is in going a different direction, turning back to the books, and turning AWAY fro the CIA-as-bad-guys stuff that Gilroy seems to love so much. That probably means turning away from Gilroy, too, since he seems unwilling to change course and doesn't get the books.

It's kind of funny that Universal took one of the only Ludlum books in which the government agencies WEREN'T really bad guys and turned them into such! He's got a lot of thrillers about shadow government conspiracies and intelligence agencies run amock, but in the Bourne books, Treadstone is presented as IRRESPONSIBLE but not EVIL.