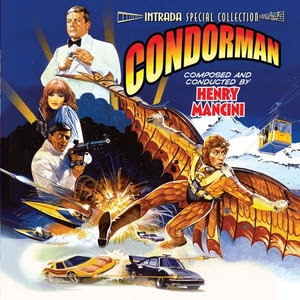 Intrada has just released Henry Mancini's score to the incredibly entertaining 1981 Disney spy/superhero comedy Condorman on CD. This release, which contains the score in its entirety, plus bonus tracks, marks the first time this Mancini gem has ever been available! The $19.95 disc, available "while quantities and interest remain," can be ordered from Screen Archives Entertainment. Now if only Disney would re-release the movie on DVD and Blu-ray! Or at least as an MOD title in their Disney Generations Collection. The old Anchor Bay release (which was flawed anyway), now commands hugely exorbitant prices used on Amazon. (The film is available to stream, however.) As I remember it (and, admittedly, it has been a very long time since I've actually seen it), Condorman is a whole lot of fun, and basically a Bond film for kids. It re-teams the Jokers duo of future Phantom of the Opera Michael Crawford (as the hero) and Oliver Reed (as the Russian villain), along with future Bond Girl Barbara Carrera as a goodie rather than a baddie.
Posted by Tanner at 6:31 PM

Hi Tanner, Great blog, on a topic very close to my heart.
Thought your readers might want by interested in re-release of Espionage a Trios album - download only at this point - from 2000 by Australian band Astro Tabasco.
https://itunes.apple.com/us/album/espionage-a-trois/id591070868
keep up the great work!