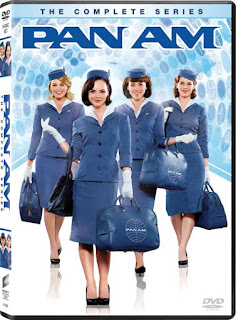 TV Shows On DVD reports that Sony Pictures Home Entertainment will release Pan Am: The Complete Series on DVD on January 29. The Sixties-set drama focused on the lives of jet-setting stewardesses, but featured more espionage than one would have expected given its promotional campaign. One of the stewardesses worked for British Intelligence, who took advantage of her frequent trips to political hotspots like Berlin. A subplot (albeit a fairly major one) in the show's first (and, ultimately, only) season, the spy thread was reportedly set to take center stage in Season 2, had that happened. While the show didn't generate good enough ratings to last on ABC, it was very popular and much better critically received overseas, and even won a prestigious award in France. The 3-disc set contains all 14 episodes, with retail set at $30.99. It will no doubt be available much cheaper than that, however, on Amazon. Extras (a rarity for failed shows) include the featurettes "Becoming a Pan Am Stewardess," "The Berlin Set," "The Life of a Stewardess," and "The Plane Set," along with an interview with Former Pan Am stewardess and the series Executive Producer Nancy Hult Ganis.
Posted by Tanner at 4:41 PM

Glad it is coming to DVD, but what a missed opportunity - why can't they throw on the original version of the first "pilot" episode (ha ha) with Jonah Lotan?

That would have made a great extra. Too bad. I wonder if it was a licensing/royalties issue?