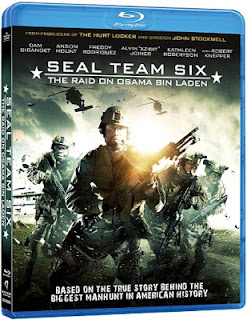 Zero Dark Thirty hits theaters in December and January (depending on where you live), but the other hunt for Bin Laden movie, Seal Team Six: The Raid on Osama Bin Laden

(which premiered on the National Geographic Channel earlier this month, where it drew 2.7 million viewers) hits DVD and Blu-ray on January 8 from Anchor Bay Entertainment. The movie chronicles the dramatic hunt for the world's most notorious terrorist, covering both the CIA and JSOC sides of the operation. Cam Gigandet, Anson Mount and Freddy Rodriguez star. According to the press release, the film was "vetted by a team of experts, including a recently retired Navy Seal, a top CIA operative, and one of the most renowned bin Laden historians." Retail is $19.98 for the former, and $24.99 for the latter. The only announced special feature is a making-of featurette.
Posted by Tanner at 12:20 AM

This is a more general comment but thinking of upcoming DVDs of old material, did you ever come across an ITV series from about 1980 called “Cover”. It was heavily promoted at the time because it was the first tv vehicle for a leading Shakespearean actor, Alan Howard. It was a quirky show – The Sandbaggers with surreal humour – and of course bombed badly. I would love to see it again but its difficult even to get information about it. I wondered if you knew it.

Interesting! I've never heard of that one. But "Sandbaggers with surreal humour" sounds just about perfect to me, so now I, too, am keen to see it released! Sorry I can't help though. Most of my knowledge about ITV shows I haven't seen comes from Dave Rogers Encyclopedia of ITV Adventure Series (I think that's the title), and that one's not in there, weirdly. Are you sure it was ITV? If it is, then our best hope is probably Network. But they seem to have slowed down on their ITV spy releases lately, unfortunately. If it's covered in the Freemantle Media deal, perhaps Acorn here in the US will evnetually put it out.

In the meantime, another Alan Howard spy series, Frederick Forsyth Presents, is currently available in both the UK and the US. (As is, of course, A Perfect Spy.)

But Cover sounds great. I'll certainly keep my eye out for it!

I am sure it was ITV but as I thought the lead character (our view point), called Willie Wigglesworth, was played by Michael Kitchen (Foyle’s War etc) and it turns out that it may have been the guy from the BBC Hitchhiker’s …who knows……anyway, that set me thinking and I have pasted a link to Howard’s website which has the most detail you will get almost anywhere….

I did ask Network if they were going to release it but they will not discuss forthcoming projects or so they told me rather succinctly.

Incidentally, one year you should try to get over for the Dead Man’s Treasure Hunt weekend. If it makes its 27th year in 2013 I think it will over the Pinewood way. It’s a fun event and ends with an honest-to-gosh treasure hunt – often in Avengerland and using locations where it was actually shot. Your reference to Dave Rogers’ book reminded me as he flogged that to us as it was released when we were staying in the motel where Number 6 went to get his anti-poison liquor – at least they shot the entrance to it for that purpose.

I would LOVE to do Dead Man's Treasure Hunt one year, Chris... LOVE! It's long been one of my ambitions. But sadly one that remains out of reach for the time being, cost-wise. One day!

If Michael Kitchen were in Cover, then I'd be REALLY interested! I love the guy, from Dracula 1972AD to GoldenEye to Foyle's War!