Tradecraft: Hunted Gets Reconfigured for Second Season on Cinemax, but Not BBC 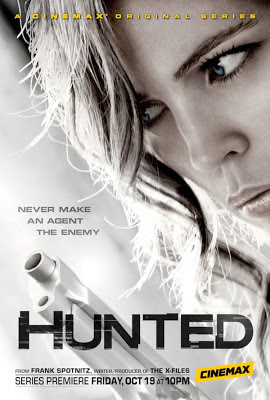 Frank Spotnitz's BBC/Cinemax spy co-production Hunted, starring Melissa George (Alias), has earned a second season from its American network, but not its British one. I don't get Cinemax, so I have yet to see the show myself, but the reviews in America seemed decidedly more positive than those in Britain, so that might partially explain the networks' differing decisions. Ironically, it was the BBC who initially commissioned the eight-episode series, and Cinemax only came aboard after the fact as the American distributor. Because of that arrangement, Deadline reports that "continuing the series in its current form proved impossible without partner BBC. That has led to Cinemax brass looking for another way to keep the premise and the Sam Hunter character alive while also assuming greater creative control." So the series will undergo some changes in its second Cinemax season, which might possibly amount to a new title, a change of location (without a UK company on board, will the production remain based in London?) and cast changes (though George will remain). Additionally, the trade blog reminds us that "for a pay cable network, doing a series with a public broadcaster like the BBC imposes certain restrictions on the content." Considering this is Cinemax, and considering their brand (think Strike Back), I would hazard that that translates to "expect more nudity." But this is all speculation on my part. All the cable network will promise, at the moment, is that "We are making plans with creator and executive producer Frank Spotnitz and star Melissa George to present a new chapter in the Sam Hunter mythology."

The first season (series) comes out on DVD and Blu-ray in the UK on November 26, but no U.S. release date has yet been announced. Following standard patterns, I wouldn't expect one until next summer, closer to the air date of the second season or new series or whatever it turns out to be.
Posted by Tanner at 6:23 PM

Interesting, in that over here in the UK it has only been reported that the series is cancelled (by the BBC). No suggestion that it will be continuing with other producers.

Sorry to be a nay-sayer, especially since I do like Melissa!, but the series *really* isn't very good. Hence UK viewing figures falling off a cliff.

The disparity between the reviews on both sides of the Atlantic (and between yours and that of an American reader who's emailed me his own glowing opinion) makes me very curious about this show indeed! I'm wondering what could make it so divisive? Sadly, I'll probably need to wait till the US DVDs come out next year to weigh in with my own opinion.

I've seen the first 6 episodes, which I think is current on Cinemax (at least it is for On Demand). It took me a bit to get into this one. There are some problems. The fighting scenes, while expertly choreographed, are arguably forced and unnecessary. I for one would like to see less sex and violence, as I don't see how it moves the story line forward. I'm no prude, and would be fine with the sex if it was softcore porn - but that's not what I'm looking for here. Disgusting violence, in my view, is always unnecessary. I do find the spy and intrigue parts quite interesting, so I've been sticking with it for that. I think the show wants to be "Strike Back" and would be better off as "Homeland".