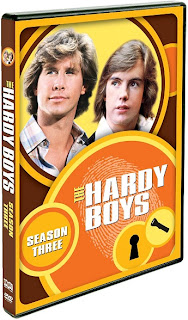 Avengers fans, take note! Six years after the first two seasons of The Hardy Boys/Nancy Drew Mysteries came out from Universal, TV Shows On DVD reports that Shout! Factory is releasing the third Hardy Boys season, sans Nancy this time, on DVD in February. Why is this of particular interest to spy fans? Well, the show does sometimes deal in espionage, and in this season the Hardy men have graduated college and are official government agents themselves and help a Soviet defector wishing to relocate to Hawaii in one two-parter... but that's not why I'm mentioning it. Not specifically, anyway. No, I'm mentioning it because Patrick Macnee turns up as a guest star in the episode "Assault on the Tower" playing a debonair, bowler hat-wearing British agent identified only as S. This was just a year after The New Avengers went off the air, so fans of John Steed will probably want to add the DVD to their library. (Well, completists, anyway, like myself.) The 3-disc set hits shelves on February 12, 2013, and retails for $24.97, though it can already be pre-ordered from Amazon for significantly less.
Posted by Tanner at 2:49 AM

thanks for the review. Hope it works for all skin types.