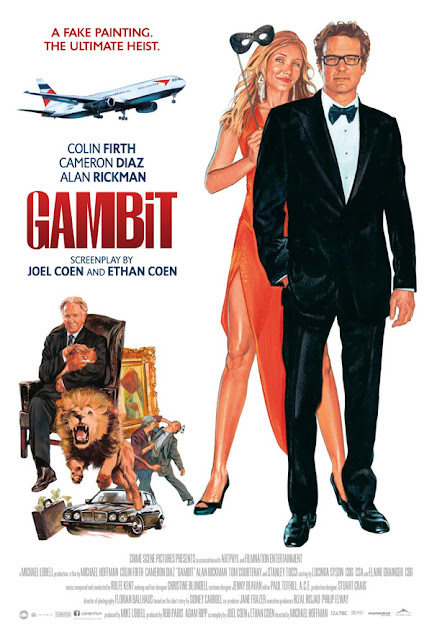 Gambit's not a spy movie; it's a caper... but that hasn't stopped me from writing about it on occasion here before. Anything Sixties and swinging and Michael Caine is fair game in my book! And it's a really fun film, that lots of spy fans are apt to enjoy, co-starring Shirley MacLaine and the recently late, always great Herbert Lom. But this post actually isn't about that Gambit. It's about the new Gambit, a remake with Colin Firth donning Michael Caine's signature glasses, Cameron Diaz in the MacLaine role, Alan Rickman filling Lom's shoes (who else possibly could?), and Otley's Tom Courtenay in another part. The script is written by Joel and Ethan Coen (that's right: the Coen Brothers), but when it comes to remakes, that's no guarantee. (Remember The Lady Killers?) Still, I'm hoping this one's good. Its poster certainly is! That's the real reason I'm talking about it. Fans of Sixties spy movies tend to be fans of the lurid, illustrated posters of the Frank McCarthy/Robert McGinnis school—the sort seldom seen since A View To A Kill. I certainly am. Which is why it thrills me to see a poster (via Sky Movies) for a new movie marketed with actual artwork instead of a Photoshopped collage of actors' faces floating over a generic bluish background! It's not quite on par with the original's posters, but I'm definitely a fan of this campaign. Below is the original's McGinnis artwork for comparison. 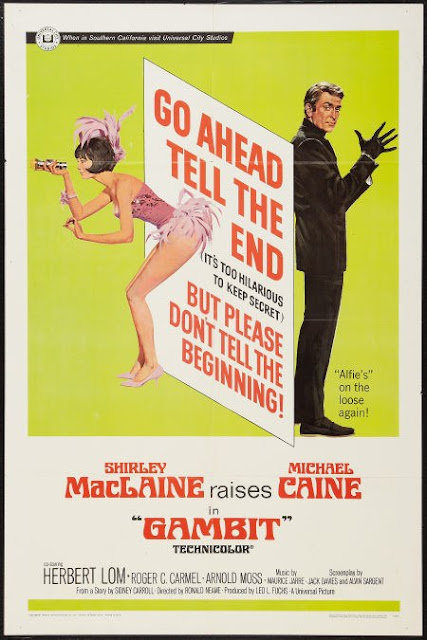 It's a lovely poster, great cast too, but reviews thus far have claimed the film is a huge let down and a pale shadow of the original - and too different.

Wonderful poster - I wish they'd do a similar one for a Bond movie again, but I don't see it happening anytime soon.

It would create a wonderful nostalgia to incorporate some of McGinnis's artwork in a poster. They brought back the Aston Martin DB5, so we can always hope.