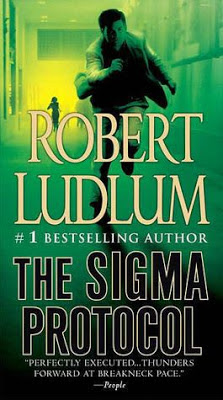 Is the main character named Sigma? No, but that is the name of the evil organization.

Is there a protocol? Not really. Ludlum or his editors were grasping at nouns.

“At times like these,” writes Robert Ludlum in The Sigma Protocol, during a scene in which one character comforts a grieving friend, “we speak in clichés and mind it not a bit. Clichés are comforting; they’re well-worn grooves through which we can move easily, unthinkingly.” Those are apt and perhaps self-aware words coming from Ludlum in his final completed manuscript. The author spent his career trading in clichés, and was a master of them. Time and again he returned to the same familiar ingredients in his novels, and, indeed his readership never minded it. They were comforting, and we did return to them again and again precisely because we could move through Ludlum’s well-worn grooves easily and unthinkingly. This is not a criticism of the author, but a commentary on the genre. “International thrillers” (to borrow a term from Otto Penzler that’s perhaps more accurate than “spy stories”) are constructed from a pool of well-worn clichés that have been rearranged again and again since at least the days of John Buchan and E. Phillips Oppenheimer into page-turning paperbacks of varying quality. Ludlum was one of the very best at organizing these familiar elements into hundreds and hundreds of pages in new and exciting novels for over three decades. The Sigma Protocol reads like a “Best of Robert Ludlum,” revisiting all of his favorite tropes. We’ve got the basic ordinary man on the run, caught up in a vast international conspiracy and secret cabal operating within the American Intelligence Community that fuel the majority of the author’s books, along with the twin brother angle from The Gemini Contenders, the Nazi inheritance angle from The Holcroft Covenant, the Swiss banking intrigue from The Bourne Identity (among others), the secret pact between Allied and Axis industrialists from The Rhineman Exchange, and the long-thought-dead loved one revealed to be alive from The Parsifal Mosaic. And that’s all in just the first hundred pages of a fairly sizable tome!

As with Van Damme movies, you can’t refer to a Robert Ludlum novel as “the one with the twins,” because there are actually two with twins—one in which the living twins must fight each other and another in which one of the twins is dead and the survivor must avenge his death. The Sigma Protocol is the latter twin book. Ben Hartman is a wealthy international banker (by inheritance, not by choice) who discovers that his twin brother’s death was not an accident, but the work of a sinister cabal dating back to the final days of WWII that will stop at nothing to conceal its secrets. The inciting incident that leads him to this discovery is typically Ludlumesque: while vacationing in Switzerland, Paul runs into an old college friend he hasn’t seen in years on the platform of a train station. Rather than fondly embracing and catching up, however, the old friend draws a gun and attempts to murder Paul, who inevitably finds himself on the run from that moment on. 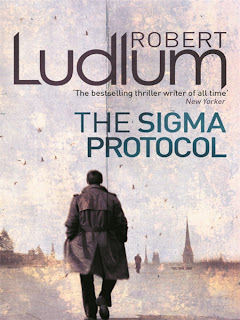 Meanwhile, back in the States, Justice Department agent Anna Navarro finds herself transferred to an even more shadowy government agency and ordered by its enigmatic boss to investigate a string of murders of wealthy old men who share a secret connection and, ideally, predict and prevent the next assassination. Her inquiries take her from Canada to South America to Europe, and inevitably result in multiple attempts on her life. While Paul is very much cut from the cloth of classic Ludlum heroes (affluent, idealistic, and in over his head), Anna is the most successful character in a new breed of Ludlum women that came along in the Nineties. She’s tough and resourceful—but not a mere cardboard cut-out. Like Marie from the Bourne series, she feels like a real woman, but unlike Marie she’s far more capable when it comes to combat and espionage than her male counterpart.

It takes far more pages than you would think for these two storylines to intersect and Paul and Anna to cross paths, but once they do, they form a formidable team. Suddenly Anna finds herself wanted by her own agency, and so the unlikely pair end up on the run together, resulting in still more globe-hopping. New clues take them from city to city on multiple continents, and into contact with aged Nazis and Nazi hunters alike, powerful business tycoons (one a shut-in after being horribly burned years before), and a truly diabolical villain unlike any other in the Ludlum oeuvre. These are all familiar beats—the “well-worn grooves” a reader can move easily but comfortably through—but the bad guys’ scheme is something entirely new for this author. Unusual for the genre at large, in fact, because while ostensibly scientifically grounded, it owes more to Bram Stoker than Ian Fleming. No, it doesn’t actually get into supernatural territory, but it’s the closest you’ll ever come to seeing Jason Bourne fight vampires! (And that’s all I’ll say.) It’s this unique (and quite brilliant) twist that elevates The Sigma Protocol above a mere “best-of” late career refresher. It makes it one of the author’s best books. It’s also probably the one in most glaring need of being filmed. 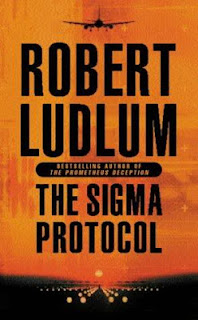 There’s been a movie in the works for a few years now, and one version reportedly strayed far from the book’s storyline to tie it in with the global financial crisis. Hopefully the new screenwriters hew much closer to Ludlum’s story (their stated intention upon taking over). Because what would you rather see: boring stock market stuff bearing little resemblance to its source material, or something straight out of Ludlum tantamount to Bourne-vs.-Dracula? I know which one I’d prefer, and I suspect audiences would as well. A faithful adaptation of The Sigma Protocol is a film I would love to see. The book is a great read, and the audio version read by Paul Michael is a fiercely compelling listen. After finishing it, I found myself on a whole new Ludlum kick, revisiting many favorites I hadn’t read since high school, and reading and listening to ones I’d never experienced before. I’ve made many great rediscoveries and a few new ones, and I’m grateful to The Sigma Protocol audiobook for putting me on that track. The Bourne Identitiy might be responsible for getting me hooked on Ludlum to begin with, but it's The Sigma Protocol that did it all over again and resulted in this Ludlum Dossier series.

I just picked this up in a charity shop (what we in Britain call a good will store). Never read Ludlum before, but sounds like a good place to start. Thanks for the reviews.